“Architecture should speak of its time and place, but yearn for timelessness.” 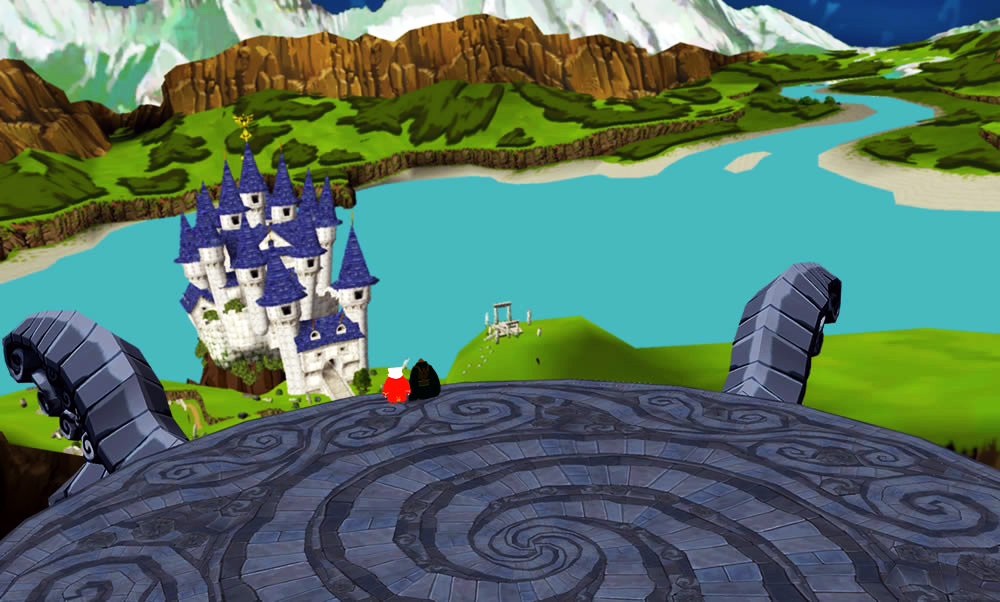 Hyrule Castle, principal seat and ancestral home of the Royal Family of Hyrule, is the most highly-featured and central building of the entire series. From game to game, its many permutations in layout, design, and location are minimal, making this one of the most recognizable and fixed structures in this universe. Granted, there are changes in each new title, based upon plot and gameplay, but its signature blue roof, high stone walls, and many towers can be seen without fail in nearly every game. By and large, this castle is located near the absolute center of the land of Hyrule; it is the center of the monarchy, government, religion, and economy, and its counterpart, Hyrule Castle Town, is usually the largest concentrated population to be found anywhere. It is the chief settlement of the Hylian people, and this is reflected in the planning and architectural splendor of the city and castle.

In the world of The Wind Waker, in which Hyrule has been sealed beneath the sea by the power of the goddesses, Hyrule Castle is held in a state of temporal suspension; the land and castle have fallen into ruin, enemies occupy the hallowed chambers of the keep, and destiny has been, for the moment, stayed. The key to the restoration of time in this world is the Master Sword, resting upon a dais in a beautiful and hidden room beneath the great hall. Only after Link is recognized as the true hero through his completion of the trial of the gods is he able to venture beneath the sea and wrest the sacred blade from its pedestal. For a while, though, Hyrule is ageless.
The central hall, caught in perpetual twilight
Johann Wolfgang von Goethe once wrote that music is liquid architecture, and that architecture is frozen music. His meaning was likely that there exists some parallel or commonality between music and architecture, and that each plays out similar effects upon the human soul. This is an idea with ancient origins, coming in part from the greater minds of the Greek people, and both phenomena continue to shape human life in subtle and powerful ways. Yet, music is alive only within time, needing to be played in order to be understood and loved, whereas architecture is a timeless entity that can be experienced at a glance, needing nothing external to cross that gap between itself and the human mind. The confluence of these two arts produces a blurring of heightened emotion, from which it is difficult to separate the music from the structure. The two have left an irretrievable part of themselves within the other.

Concerning the music, the theme is taken from a prior Zelda title, but given new life. Rather, it is made melancholic and lethargic, reflecting the current state of the underwater citadel. It is a slow and regal theme, but also indicative of the indolent darkness trapped within this frozen sphere of time, waiting only for release.

As Link descends through the oceanic depths upon the King of Red Lions, we as gamers are given our first glimpse of The Wind Waker’s conceptualization of Hyrule Castle, with its many spires crowned in blue. First appearances place it squarely in a European theater of architecture, with clear influences from both France and Germany. Even down to its setting — a lonely hill resting against a body of water with high, snow-capped mountains in the backdrop — it is a beautiful adaptation of German Bavaria’s Schloss Neuschwanstein, fitted with the trappings of Hyrulean nobility. It is a structure primarily Romanesque in school, and these elements manifest themselves on both interior and exterior.
Strikingly, while giving the appearance of grandeur, this structure also exudes weakness — as shown in the slight leaning of its outer turrets and walls. It is a tightly-fitted complex, as the hill upon which it resides cannot support a more sprawling fortress. For this reason, a more vertical structure is necessary, which is why there is an underground sanctuary below a multi-leveled nave, not even taking into account the even taller towers. As with Neuschwanstein, Hyrule Castle begins at the gatehouse, which is protected on either side by a coned turret. Beyond this is the courtyard, which is a sylvan environment immortalized in stone. Live trees ring the court, while the main causeway into the castle is lined with an arcade in the design of a woodland. The branches and trunks of the trees interweave with one another, and this design carries upward through the first story, ending at the lowest boughs of the foliage. Around the pools of water, a very liquid motif can be found, which complements the blue roofs as well as the waters themselves. Taken directly from its German counterpart, the main face of the keep exhibits the stepped façade and sunken, square windows. These windows are found throughout the castle, including under the eaves of the tiles and above the machicolations (murder holes) of the towers. Clearly, this castle has great beauty, but also displays a military might.
The wall reliefs seem almost Elven in origin, with subtle, fluid crafting which focuses on the enchanting and arboreal features of nature.
As with Ocarina's Temple of Time, the most prominent feature of the castle's inner sanctuary is the lighting. The light within is that of dusk or twilight, and its sepia tones cast beautiful shadows upon the statue of the hero, the stone floor, and upon the arcades. This is the fundamental beauty of Western holy places, and it is portrayed here magnificently. Architecturally, the striking resemblance between the two structures below should be readily apparent. The lower picture is the basic design of a Roman Basilica, which was a common municipal structure of ancient Rome that was later adopted by the Christian Church to use as a layout for its religious buildings. From the wooden gables and rafters high above, falling downward into the square windows of the clerestory, and then branching out into the two side aisles which flank the arcades of the nave, this castle has its architectural origins in the later days of Roman antiquity. This reinforces the concept of sunken Hyrule as being the fallen Western Roman Empire in yet another way. A key element employed by this school of architecture was that of the semicircular arch, which can be found ubiquitously throughout the castle. The windows high above are of this type of arch, as are the lower arches that encompass the apse at the far end of the room. The most anachronistic aspect of the Hyrulean fortress is one of embellishment, in that the delicate carvings, reliefs, and tracings are more prevalent in the Romanesque Revival period and other later schools of architecture. Or, perhaps they are the unique contribution of Hylian masons. 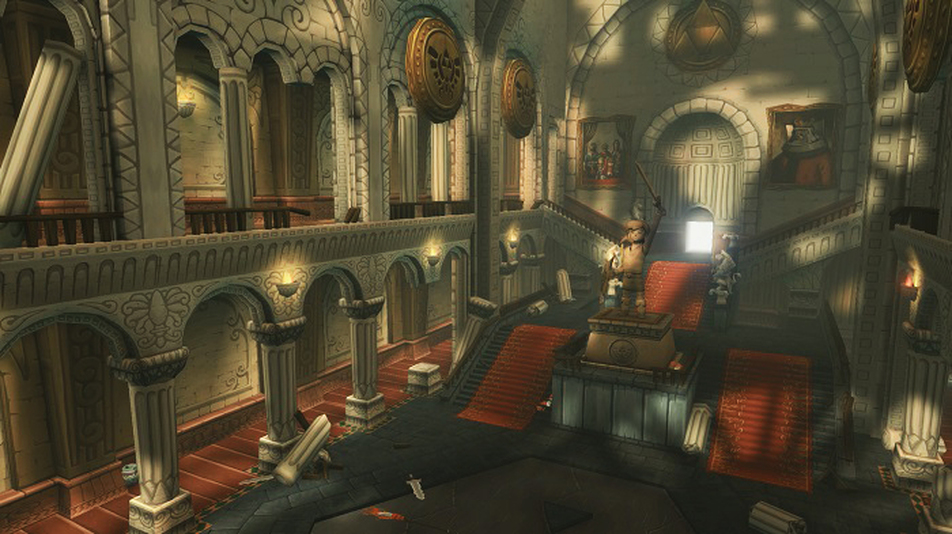 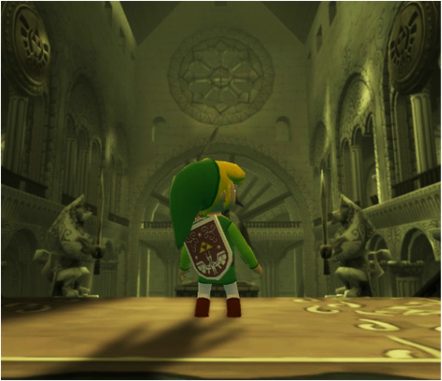 Analysis aside, the inner chamber of the castle is stunning, as its walls are etched with the interplay of shadow and light. The history and heraldry of the Royal Family are also glorified here, primarily upon the large, bronze shields that bear the royal crest, as well as within the large portraits hung upon the wall near the apse.


The other strange element in this hall is the large rose window at the far end, which was a signature component of the Gothic period. The animalistic statues, geometric motifs upon pillar and pier, and staircases are all Hylian achievements that demarcate the boundaries between the architectural movements of the real world and those of the game world.
A staircase beneath the Hero’s statue reveals a large underground chamber which features some of the most incredible stained glass in the history of Hyrule. The plainness of the foyer opens into a large rotunda, whose central feature is a dais surrounded by water. Upon the walls of the outer ring are images wrought in stained glass of the Six Sages from Ocarina of Time, as well as a larger window of the history of that game, featuring Ganon, Link, and the Triforce above all. The glass used to depict these sages reflects the colors of their particular elements, which helps to cast radiant, varicolored light around the chamber. The central plinth rests under a stone dome, and is surrounded by hulking statues of knights lowering their swords in reverence. It is here that the Master Sword is enshrined, and the legacy of the original Hero celebrated. Throngs of citizens, bowing and applauding, encircle the pedestal of the sword, while the Sages and knights look on. If ever a room was meant to draw focus to a particular aspect of itself, it is this room.
The primary purpose of this sunken citadel is the housing and protection of the Master Sword, although this is just one of its many functions. For while it serves municipal, governmental, and religious functions, it is also a place meant to safeguard the history and culture of Hyrule, whose most central tale is that of the continual and epic struggle of good and evil, and of a deeply-needed and persisting hope.