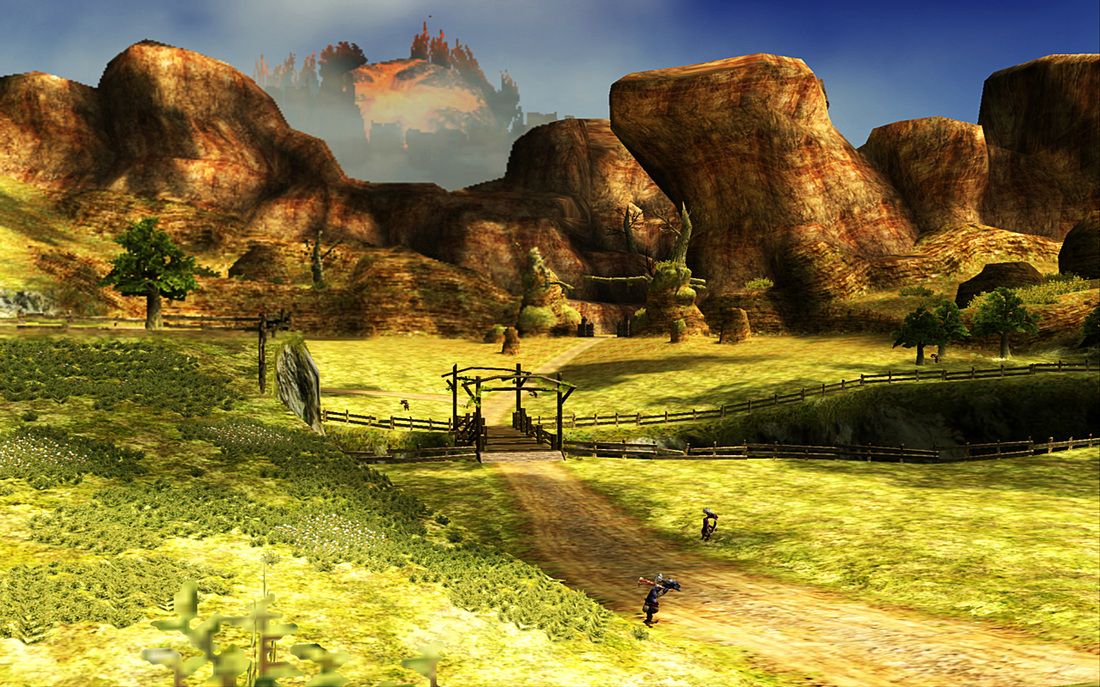 Eldin Province is a province in steady decline. The two major peoples of the area, being the humans of Kakariko Village and the Gorons of Death Mountain, each face a particular subset of problems that are unique, yet ultimately linked to one another, as problems invariably are. At the root of all these problems is the monstrous metamorphosis of the Goron Patriarch, which has thrown the Goron Mines into disarray, precluding the harvest of the Goron special crop, the mining of precious ores, as well as general entrance into their sacred grounds and shrines. These travails at the heart of their mountain have led them to close off their society, shutting off trade and communication, which has inevitably led to hardship at the foot of the mountain.

Kakariko Village appears to be decaying, though the cause is not at first visible. Due to the insular policies of the Gorons during the loss of their leader, Kakariko has had no trade to speak of, and its already-small population seems to have emigrated elsewhere. Its difficulties are further exacerbated by the onslaught of twilight which covers the town, having killed or converted many villagers into Shadow Beasts. This province is a proving ground for Link that delves far below physicality; he is helping to rid the land of poverty and recession by ultimately reuniting its people. This is an oft-overlooked theme within the Zelda series, wherein reconciliation of peoples whose ability to reunite independently has been severely compromised by something exterior exerting itself upon their societies. These civilizational issues are reflected in the landscape of the region, whose terrain and architectural heritage is drawn primarily from the American Southwest during the rather brief and rustic era of the Old West. 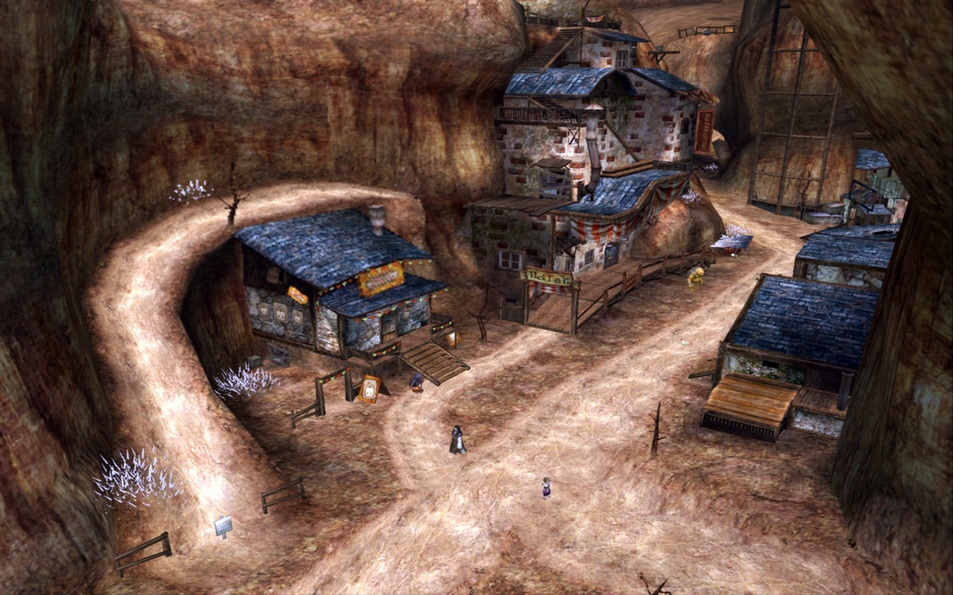 The Kakariko Village of Twilight Princess is far removed from its various other interpretations. Resting uneasily within sight of the volcanic caldera of Death Mountain, whose hardened ash and flame rend the sky, the village hugs both sides of a desiccated ravine. This immediately calls up the image of a western town, where the prominent buildings would line either side of one main street; this is true of Kakariko, whose inn, sanctuary, bomb shop, and houses sidle up next to one another on the only road through town. In such an arid and dusty region, and especially living in a windy gulch, the houses have few, if any, windows, and even these are extremely small, only for the occasional airing. Since the Twilight Invasion, both roads into town have been sealed off, and no one mans the prodigious watch tower that overlooks the entrance to Hyrule Field. Regarding style, there is not much to say. Simple, rough masonry (a combination of brick and stucco, seemingly) rests upon wooden or dirt foundations, which then give rise to the blue-tiled roofs of the houses. Little skill has been employed in the region's woodworking, and even the metal chutes on buildings seem nearly ready to fall from their positions. Yet inside Malo’s shop, which the ambitious youth sets up in order to fill a sundries vacuum, there are wires and electric lamps. I don’t believe that we see such electrical devices used in any other locations within the game, so it is almost unbelievable that such technology should be at play here.
But these are just some of the buildings. Another cultural tradition breaks the surface near Eldin Spring. The house of the spiritually-attuned village healer, Renado, and his daughter is of the pueblo style, shaped fancifully and made of adobe. Through cracks that have appeared in the outer wall, the building's skeleton — consisting of wooden beams and supports — gives us a glimpse into the construction techniques of the region. The structure itself looks like an overturned pot, or perhaps a tent made from stone and earth. Harsh weather or falling rock has rent the upper portion of this sanctuary, revealing a hanging bell on an aged frame. Above the door, an insignia very similar to that of the Goron Ruby is barely visible on the tan stone. Red painted triangles circle the house at ground level, broken only by the two doors and windows. The aforementioned bell can be seen from the ground outside, signifying that this is likely some form of meeting hall or safe house. It is a strict incongruity with the other buildings of the town, but upon reflection it is not strange to see two architectural styles of one region married and blended together; it is a confluence of Wild West and an indigenous population whose buildings are brilliantly adjusted to match the backdrop and demands of the environment.
Inside the sanctuary, a prominent, regal statue of the Light Spirit, Eldin, perches upon a ball of light. The statue holds our attention in the center of the room, below which is hidden a secret tunnel and escape route to the graveyard nearby. Circling the room are simple renditions of eagles, hearkening back to Eldin as well as a central spirit of Native American culture. Also prominent are abstract depictions of the sun, which rest higher than the flight paths of the encircling birds.
Kakariko Graveyard has long since fallen into disrepair. A broken sign (whose Twilight Princess-era Hylian translates to hakaba, or graveyard, in Japanese) marks its entrance, and the gravestones are all in disarray. Dirt is thrown through the air, and the musical refrain is a mournful tune played upon a jug, once again echoing the thought of a western town slowly fading to dust. The tombstones here are legible yet, and the Hylian is strangely of the Wind Waker era. The foliage is lifeless, and the stonework lies crumbling. However, the signs of an ancient, more beautiful architecture are present. A hidden tunnel lies to the east of the graveyard. This passageway leads to a peaceful pool of water, which demarcates the burial site of Zoran nobility. The eye is gently drawn toward the central grave marker, which, to be honest, is stunning. Lichen and moss cover an exquisite relief of plant motifs which interweave around the symbol of the Zora, a symbol likely derived from Nayru’s holy symbol. The fluid lines carved into the stone are offset by the upward, more linear dorsal fin that forms the topmost portion of the tomb marker. The stone is placed in a hollow that is set to movement by the aquamarine reflections of the water. The wall behind this plaque carries a relief of familiar water-centered Zoran decorations, such as the conch shell and subaqueous florae; in the HD remake, faint Wind Waker-era Hylian can be vaguely seen beneath the layers of growth and age. Queen Rutela mentions to Link that this pool is where certain members of the Zora race come to rest, meaning that this font of water is most certainly a sacred one. The water is perfectly clear, and the light refracted in the water comes to rest upon the floor below in lovely, flickering tones. This mere is fed by two waterfalls that flow to either side of King Zora’s tombstone, and an underwater channel leads to another yet more sacred body of water — Lake Hylia.

Truly beautiful things render one speechless, I suppose. These images show the hidden burial site of the Zora Royal Family.

Still the ancestral home of the Goron tribe, the area around Death Mountain has changed greatly since the events of Ocarina of Time. No longer is the land surrounding the great peak arable and life-giving, with gentle hills and green grasses. Barren, dry cliffs, plateaus, and gorges have shredded the surface, and a dim haze of dust and ash is blown over a red and brown land. Perhaps not the most hospitable place for humankind, it is here that the Gorons thrive. They have channeled the powers of the geological features of this territory to their benefit, employing steam-powered machines, utilizing powerful magnets, and coating everything in scalable metal outcroppings.

The mines perform myriad functions, and Gorons have always been deeply and undeniably connected to caverns such as these. These mines contain the resources and mineral wealth of the Goron tribe, serve as a sporting arena (which houses the Japanese-derived Sumo matches) and holy place, and shelter the Fused Shadow placed in the tribe’s charge. It is an incredible hodge-podge of a complex, being the spiritual, governmental, and economic center of the Goron civilization. With this in the foremost of our minds, all of these functions should be evident in a walkthrough of this area. A hub for commerce and trade, the precious ores take a central role in the dungeon, as do the open-air loading docks, mine carts, and enormous magnetic cranes. Industry has found a home here, and manifests itself in the pipes, bolts, steel beams, metal plating, and large furnaces. The ore is mined, fashioned in some way, and then packed up and shipped off, probably using the waterways found in the main loading area. It is made known that necessary components for bombs originate here, and from the Iron Boots, it is evident that the Gorons also dabble in skillful metallurgy.
Above: the Goron Ruby can been seen upon nearly everything created by the Gorons, including the large crane and Beamos statues shown here. The other designs are simply patterned embellishments, seemingly meant to frame the more symbolic images. 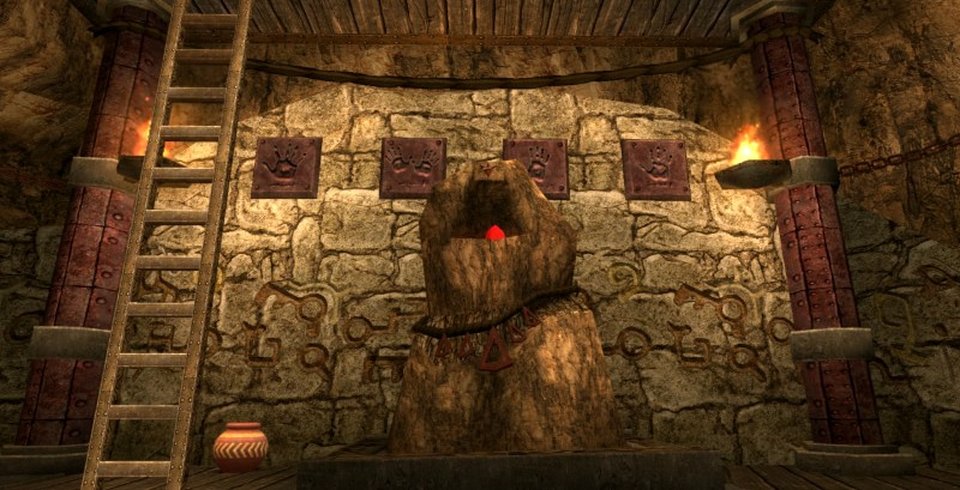 The three pictures above show the three shrines to be found within the Goron Mines. Each shrine is protected by a caretaker — an elder of the Goron Tribe. All three shrines feature, at their centers, a large, rough upthrust of rock, encircled by a necklace of colored metal or stone. Into each small alcove is set a different-colored gem, and each shrine is flanked by two large torches. While the number three is certainly sacred among the peoples of Hyrule, the exact religious significance of these shrines is currently unknown. Also of note: Link is unable to unsheathe his sword while in these shrines, perhaps speaking to the inviolability of these chambers.
Some of the stranger chambers of the Goron Mines are those whose purpose is not industry. In the antechamber to the mines proper, surrounding the wrestling platform, there are diminutive chairs, certainly not meant for Goron usage. Also odd is the Goron sense of décor, which, in addition to the ochre and dust-red paints found upon the walls, seems to consist solely of hand prints and intimidating poses. Many rooms in the Mines hold wrestling platforms, and these usually feature a small medical room with table, chair, and bed, bleachers for spectators, and prizes hung upon the walls. One set of pictures is found everywhere that these sumo-platforms are found; they depict a rotund human in a series of poses, wrapped in the curious attire of the professional wrestler. These images are found not only in the Goron Mines and in nearby Kakariko Village, but also in Ordon, where Mayor Bo has his own arena dedicated to the sport. Certainly, many cultural aspects of Eldin Province have traveled far and wide, and have been adopted in many environments.

And perhaps that is the point of all the peculiarities of this region. In some ways, it is incredibly rich and cosmopolitan. These cultural borrowings and interchange make this province, though falling apart at the seams, a quaint and memorable one. 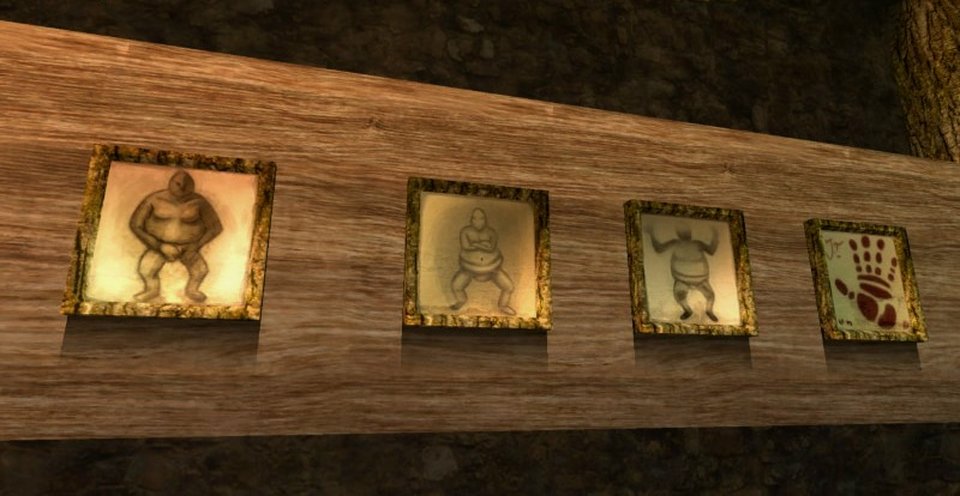