“We are in danger of extinction! It’s all because we can’t enter our quarry, the Dodongo’s Cavern. We Gorons live on a diet of rocks . . . And the most delicious and nutritious rocks around are found in the Dodongo’s Cavern!” — Goron, Ocarina of Time

Dodongo’s Cavern, so named for the endemic species found within, is the second dungeon of the Youth portion of Ocarina of Time. Interestingly, it is the only one of the Youth dungeons not to be found within a still-living creature; however, dead organisms feature prominently in the makeup of this structure, bringing some semblance of past life to our experience within. And, as with Link’s journeys into the Great Deku Tree and Jabu Jabu, part of this trial takes him through the mouth of a large and ancient creature. This passage through the mouth of a beast is an ancient motif, signifying many profound mythological elements. In his The Hero With a Thousand Faces, Joseph Campbell writes: “The idea that the passage of the magical threshold is a transit into a sphere of rebirth is symbolized in the worldwide womb image of the belly of the whale. The hero, instead of conquering or conciliating the power of the threshold, is swallowed into the unknown, and would appear to have died.” [1] Clearly, this belly of the whale symbol is explicit in the case of Link entering the body of Lord Jabu Jabu, but crossing the threshold of any beast can be seen in much the same light. These thresholds, as in the case with Dodongo’s Cavern, are a descent into that which is unknown. For all Darunia may have wagered, he had sent Link unto his death. But the journey of the Hero is of necessity a hard one, and so Link is compelled ever inward. Campbell goes on to write that, “This popular motif gives emphasis to the lesson that the passage of the threshold is a form of self-annihilation . . . But here, instead of passing outward, beyond the confines of the visible world, the hero goes inward, to be born again . . . Allegorically, then, the passage into a temple and the hero-dive through the jaws of the whale are identical adventures, both denoting, in picture language, the life-centering, life-renewing act.” [2] In setting foot into this cavern, then, Link is centering his life around his necessary action — his continued quest. By risking death, he gains life, both psychologically and spiritually. He can do no other. 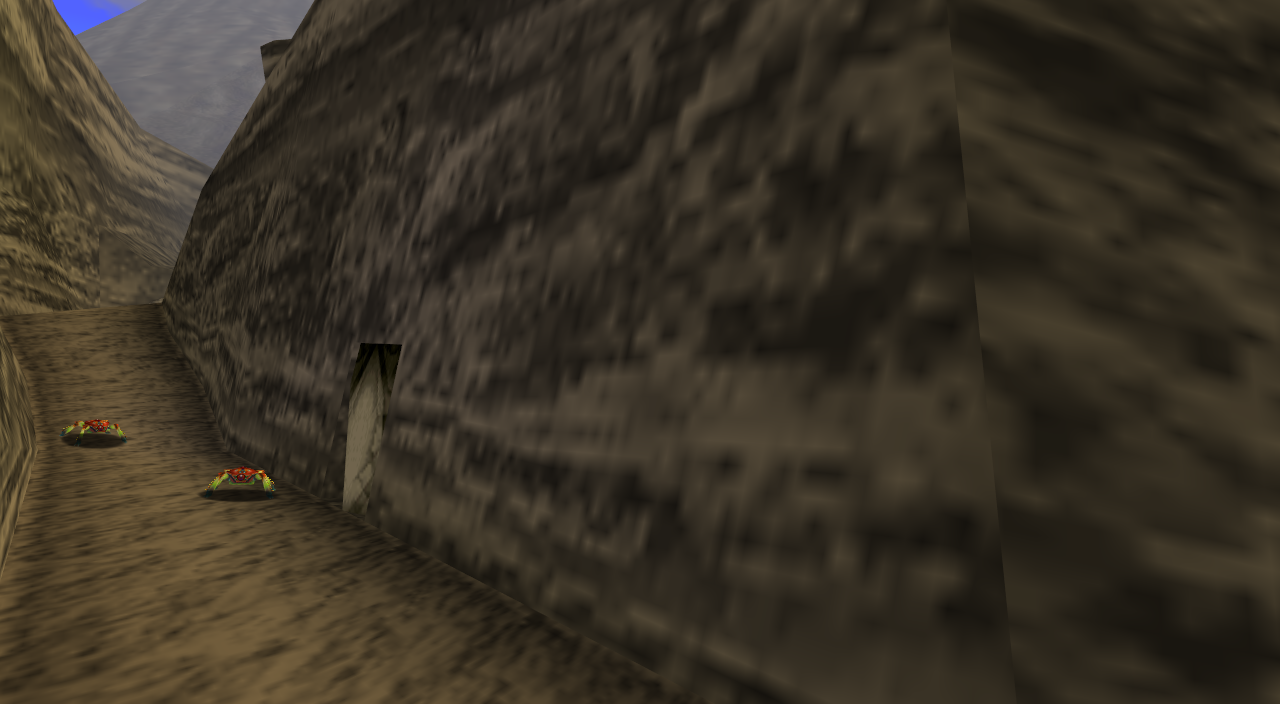 The ascent from Kakariko Village to Goron City; at the top of the path, slightly out of sight, rests Dodongo's Cavern.
The cave system is found halfway up Death Mountain Trail, this path leading from Kakariko Village to Goron City near the volcano’s crest. Tektites and smaller rocks litter the path, and a lone Goron sits dejectedly near the massive boulder blocking the entrance to the mine. As this Goron notes, his people are slowly starving, having been separated from their quarry and source of food. In previous weeks, Ganondorf had attempted forcing Darunia into giving up the spiritual stone of fire. When he was refused, instead of killing the Gorons outright and seizing what he deemed his, he instead destroyed their means of survival, thrusting them upon a track of humiliating starvation. [3] Through Link’s quest for the spiritual stones, he is eventually given the Goron’s Bracelet by Darunia, and with that, the power to uproot bombs, which are then used to destroy the massive boulder blocking off the Goron mine. Interestingly, the Gorons themselves seem to lack the creative fire necessary to understand the explosive potential of their own crops in the solving of their food problems. And the boulder is simply the beginning of Link’s trial.
The initial clearing of the large boulder and the subsequent bombing of the inner door, leading into Dodongo's Cavern.
The entrance to the mines is a long, clear-cut tunnel, leading to the main chamber of the Cavern; two bomb flowers flank a stone barrier, and Link, using his previous knowledge, is quickly able to pass. The chamber that lies beyond is, I think, unforgettable. The floor immediately falls away to a moat of dully-glowing lava, encircling an island, from which rise and fall stone pillars. Raised platforms along the side walls allow access to six alcoves or doors — some sealed, some open. The chief feature of this room is affixed to the back wall: an enormous, resting skull staring ever forward. This skull was likely placed there by Goron architects, given the arrangement of other dodongo parts throughout the cavern used as embellishment. The hall is upheld by eight cyclopean ribs and a large vertebral column running the center-length of the ceiling. These bones all glow with a demon-light, cascading around the cavern, which to all senses appears to emanate from the bones themselves — a vivid panoply of red, green, purple, and blue. For such bright colors, the effect is chilling. 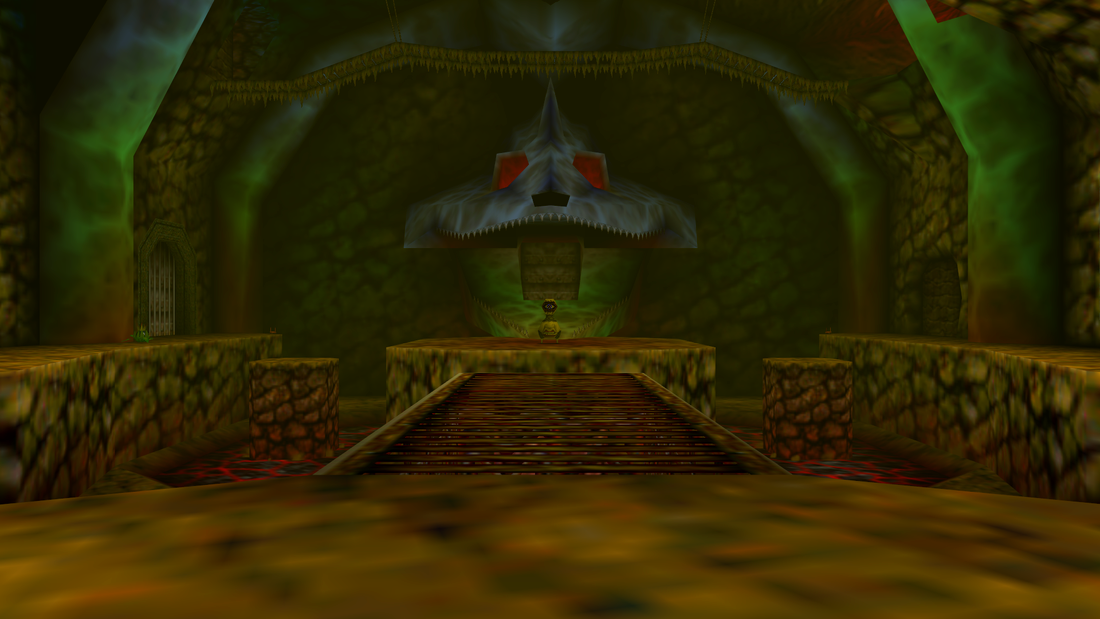 The atmosphere is further darkened by the ambient noise within the cavern: a throaty rumbling, seemingly created by beings deep beneath the earth, which struggles to escape through small cracks in the stone, as if it were rising steam from some subterranean vent — veiled echoes in a hidden mineshaft.

The first hallway appears to be a mining corridor, hewn of rough stone and braced with makeshift log frames. Above, what appear to be pipes cross the hall from one wall to another, and the ceiling is beyond sight. Massive blast doors of solid metal with heavy rivets divide most hallways and chambers, while most of the rooms themselves are natural caverns, some at least partially sculpted, and some simply braced with dodongo bones as rafters. It is either resourceful or morbid (depending on the intent of the architects) to have used dodongo bones so prominently as building materials, whether for structural integrity or decoration. In general, the natural caverns seem to be predominantly passageways, while utilized space tends to be carved carefully, or at least bears some sign of thought and planning. The Cavern appears mostly uninhabitable, though all rooms show signs of use or forethought. With the Gorons gone from the mines, other dwellers have become predominant. Many Dodongos in various stages of growth live within the caverns, and bomb flowers grow in profusion, though in set places, generally speaking, as if used in landscaping — framing doorways, surrounding staircases, or set at prescribed intervals along walls. [4]

For me, though, one room stands out in memory above all others, and it is marked by a staircase. A cleverly-placed bomb will set off two independent strings of explosives, shaking the central staircase to its core, causing it to sink earthward, revealing a path to the second level. Two other rooms are particularly noteworthy, though they are, in truth, one large room linked by a waterfall of lava; within this larger chamber, there are two massive pools of magma, from which have been carved platforms of stone. It is on these platforms that Lizalfos bewilder and harry Link, jumping from one platform to another with an almost otherworldly spryness. The walls are lit with a shifting red, while an obfuscating haze separates the two “chambers” from one another, lending indefinite depth to each in turn. 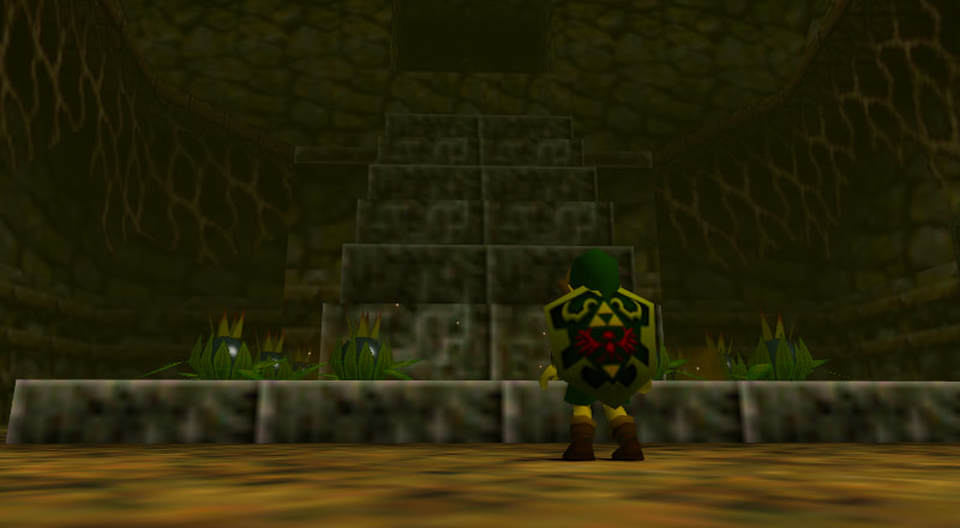 Once Link has obtained the bomb bag from the higher level, he returns to the two massive rope bridges spanning the central cavern, one of which leads directly above the head of the immense dodongo skull. A placard on one of the balconies reads, somewhat vaguely:
“Giant dead Dodongo . . .
when it sees red,
a new way to go
will be open.”
Any wayfarer who has completed the dungeon (which, as a fifth-grader, took me many late and confusing hours [5]) will remember the striking answer to this riddle: by dropping two bombs into the vacant eye-sockets of the beast, we “awaken” it once again, causing red flames to kindle in a space which once was lifeless and black. Once the eyes have come to life, the lower jaw drops, extending to the central platform of the chamber, revealing the way forward. Successive rooms reveal further puzzles in dim tunnels, until we come to a fractured floor. Using a bomb here exposes a hidden entrance, a plunge into the unknown. And when Link lands, he is confronted by a terrible roar and the King of the Dodongos, a colossal and frightening dinosaur. Dodging pillars of fire and huddling under the protection of the Hylian shield, Link is able to defeat King Dodongo through a few well-thrown bombs. And, as the lava cools around the now-still corpse of King Dodongo, a blue light erupts from the ground, carrying Link, once more, to the mouth of the cave. There he is met by Darunia and a band of fellow Gorons, declared a blood brother and honorary member of the Goron Tribe, and given the Goron’s Ruby — the spiritual stone of fire. And then, escaping a fate far more terrible than a dark cave and monstrous dragon, Link escapes, his feet carrying him once again back to the adventure laid out before him. 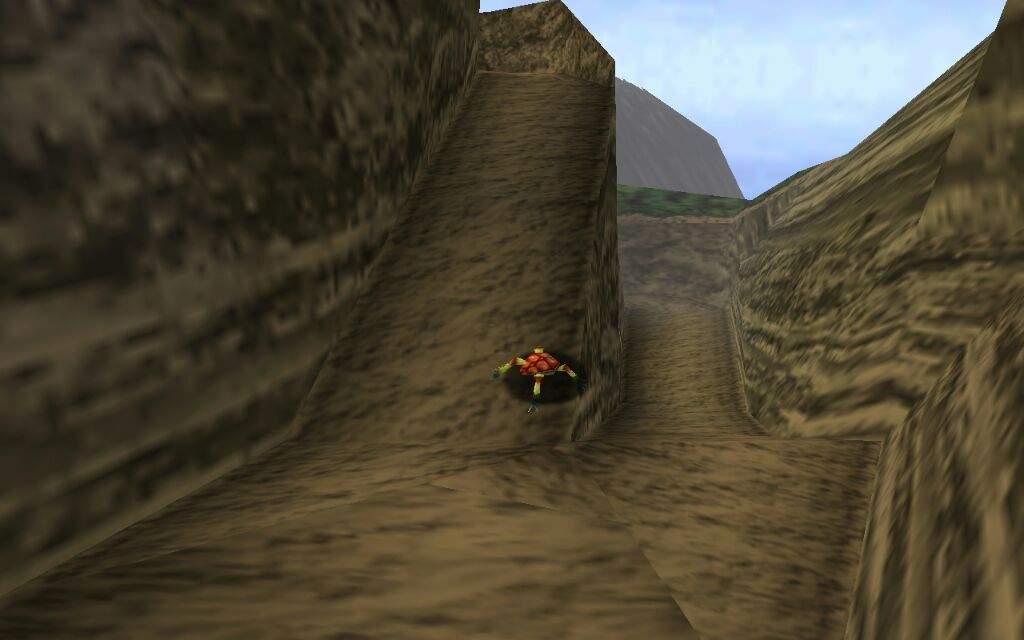 [3] Truly an ignominious fate, given their cheerful natures and historied past as a people with "a longer history than just about any race in the known world."

[4] “Because the light inside is very dim, the Bomb Flowers, a plant unique to this mountain, grow like crazy in there!” — Goron overlooking the Dodongo’s Cavern
​
[5] Delving into memory, I find that the learning curve for this dungeon ascended sharply from the Great Deku Tree, and while Dodongo’s Cavern is not the Water Temple, it certainly presented new challenges, puzzling my younger self for several nights; the addition of a linguistic riddle was not something I was prepared for, and that, coupled with the larger navigational load of a more extensive dungeon, challenged me in all the necessary ways.