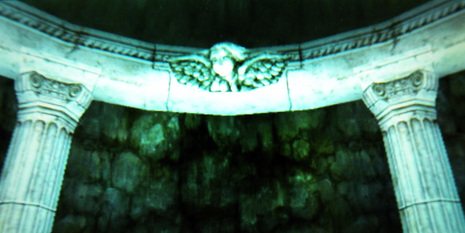 “Come away, O human child!
To the waters and the wild
With a faery, hand in hand,
For the world’s more full of weeping
​than you can understand.”

These springs of life are found throughout the land, and, as with the lands of the fey in the greater mythologies of the world, these gathering places are largely hidden from the realm of the common; they are spaces of a gentle profundity, soothing oases in a greater world of tumult. Oftentimes, to gain entry into the subterranean home of these pink sprites, a certain song must be played, or, in a few instances, force must be used. But there the trials end. After the fall, a hallway of grey stone gives way to a circular chamber delved into the earth. The actual fountain is held within the bounds of a ring of rock, and a few steps on the sand allows one to wade into the lambent sapphire pool. A ring (tholos) of interlocking lintels, featureless but for the top (where normally the entablature would be), rests atop the abacuses of six Ionic columns, slender, fluted, and in three different pieces.  The volutes of the capitals are angled, allowing them to be read from every direction. On the inside, in each cardinal direction, four sculptures hang; merely consisting of a face between two wings, these resemble standard artistic representations of fairies and cherubs. As these are but common fairies, this room is a fairly simple space, and its main function is not to inspire awe and reverence, but to heal the hurt, and to provide respite to the weary traveler.

By contrast, the Great Fairy Fountains are much more grandiose. Like the regular fountains, these caverns are also hidden, sacred chambers. These larger fairies are the leaders of their race, and are strikingly different, anatomically, from their subjects.  They greet with horrifying, startling laughter, and, in this room, they are supreme. Six, in total, reside throughout Hyrule, and knowledge of Zelda’s personal lullaby, tied deeply to the history of the Royal Family, is necessary to conjure a Great Fairy.
Above are found the two iterations of Great Fairy Fountains within Ocarina of Time's Hyrule. To the left is the Greek-inspired fountain setting, while the Egyptian fountain is located to the right.
In the 3DS edition of Ocarina of Time, there are two styles of Great Fairy Fountains; three are done in the style of ancient Egypt, and three are that of more familiar Greek architecture. The similarities between both styles, however, are these: a low hallway (with appropriate cultural ornamentation) leads to a sort of bridge of stone over calm water, which terminates in a larger, dark chamber. When Link alights to the pedestal before the hexagonal fountain, the immense sanctuary is filled with light. Two of the four walls are massive colonnades over which flows an admixture of water and something more ethereal. There is no ceiling to the room, and blackness stretches in every direction. Two torches flank the short stairway to the golden symbol of the Triforce that rests before the water.

There the similarities end, and the architectural minutiae begin. The rooms Greek in style are lit with a bluish-white light, which matches the pool and the white of the stone. The columns are fluted, as with the previously-discussed fairy fountains, but the capitals are much simpler, with a grooved pattern. The entablature above them carries a floral, leafy motif which is echoed on the platforms on either side of the stair; the platforms show a relief of plant life, which even continues to the torches themselves, in which blaze brilliant orange flames.

Those of the Egyptian influence have a strange mixture of pink and green light, emanating from the cascades as well as the torches. Egyptian columns are very particular, notable for their thickness, the plant-centered design of their capitals, and, occasionally, the inscribed hieroglyphics upon the shaft of the columns, as seen in the Precinct of Amun-Re, at Karnak, Egypt.  There are two famous (amongst several others) Egyptian styles of capitals: lotus and papyrus. Within the confines of these fountains, the capitals appear to be of the bundled papyrus design.
The shaft carries simple geometric designs, especially toward the top, where it takes on the form of reed thatching. Not surprisingly, the torches, as well as the larger pool of water, are cupped within a flower, likely the lotus, which, in some instances, is a symbol of strength and power.

While less impressive and evocative than the larger temples of Hyrule, even these smaller shrines still offer a contemplative atmosphere, and hint at a deeper, unread cultural background.