"The Gothic is singular in this; one seems easily at home in the Renaissance; one is not too strange in the Byzantine; as for the Roman, it is ourselves; and we could walk blindfolded through every chink and cranny of the Greek mind; all these styles seem modern when we come close to them; but the Gothic gets away.” 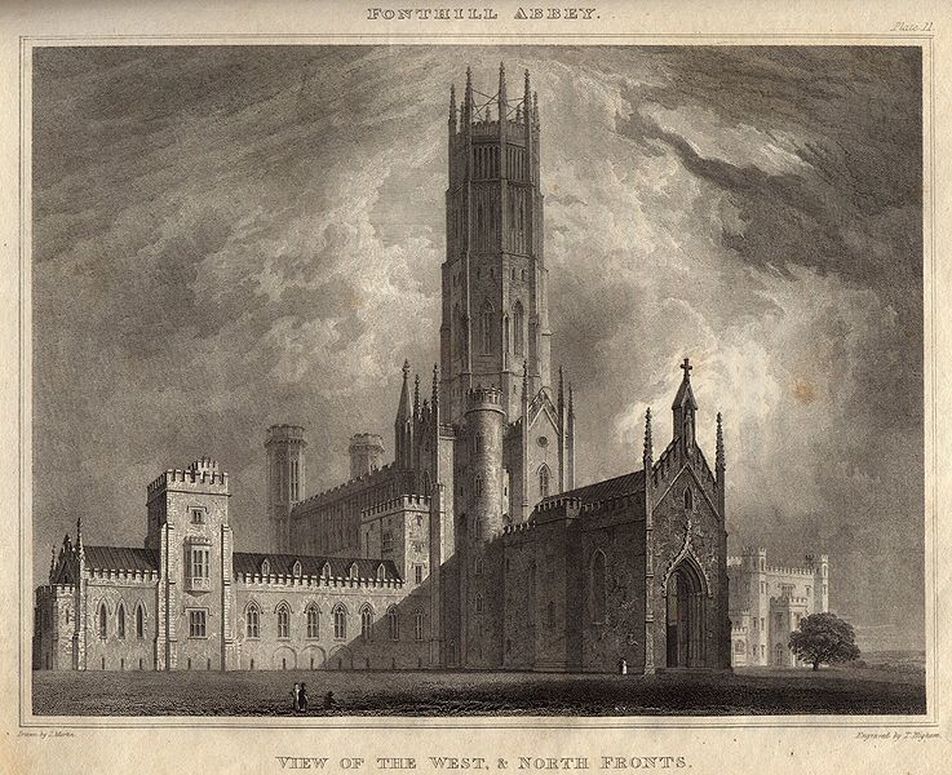 Fonthill Abbey, or Beckford’s Folly, England — John Rutter's Delineations of Fonthill and its Abbey (1823) — Image in the Public Domain
Gothic architecture, for reasons related to the emotions it evokes within the human mind, with its sharp, pointed arches, menacing spires, focus on verticality, and the nature of the embellishment, seems to have become rather harshly linked with darkness and malevolence. This connection exists despite it being an enormous architectural movement largely representative of many religious constructs throughout Europe. (The term Gothic, in this case, was originally used pejoratively, as it lacked the simple grandeur and order of other classically-based schools elsewhere in Europe, and some felt it reflected and idolized barbarity and coarseness.) Fittingly, then, Ganon’s Castle is of this same style. It is a towering fortress complex that torments the eye as it rises through circles of black cloud to its utmost levels. Its black stone with leaking, white mortar, austere walls, and gargoyles all serve to inspire fear, while the more utilitarian aspects reinforce the idea of strength and indomitable presence. Ganondorf’s conquest of Hyrule has been very much complete, and the looming nature of this stronghold is a forceful reminder of that unequivocal fact. It is built upon the grounds of the old castle, which has since fallen into a chasm of the earth, where the present building floats above an abyss of churning fire.

Traditionally, Gothic churches were themselves built as colossal spires, reaching toward heaven, in order to connect man and God. As it is dubious that Ganondorf would seek atonement with heaven, the general shape of this structure should be seen as, first and foremost, an insult and mockery of the Three Goddesses worshipped throughout much of Hyrule; Ganondorf has raised himself toward heaven, and has sought to place himself above all other deities. As the usurper of the heavens, the design of this fortress is highly symbolic of Ganondorf’s foul machinations and deepest desires.

There are truly astounding examples of archetypal Gothic architecture found in many places in Europe, where this school flourished, particularly in Spain, England, France, and Germany. While not strikingly similar to such secular and religious buildings, Ganon’s Castle carries on in the tradition of the finer architectural details of this tradition. As the fortress tapers upward, it is embellished with gargoyles perched upon corner towers, harsh buttressing on the exterior of the outermost wall, an ornate, yet delicate, cusped Gothic arch as the main gateway, and many spires and metal spikes which thrust up from the tops of the walls. Toward the upper levels, flying buttresses can also be seen, which, like the aforementioned characteristics, reflect a host of paradigmatic Gothic architectural traits. 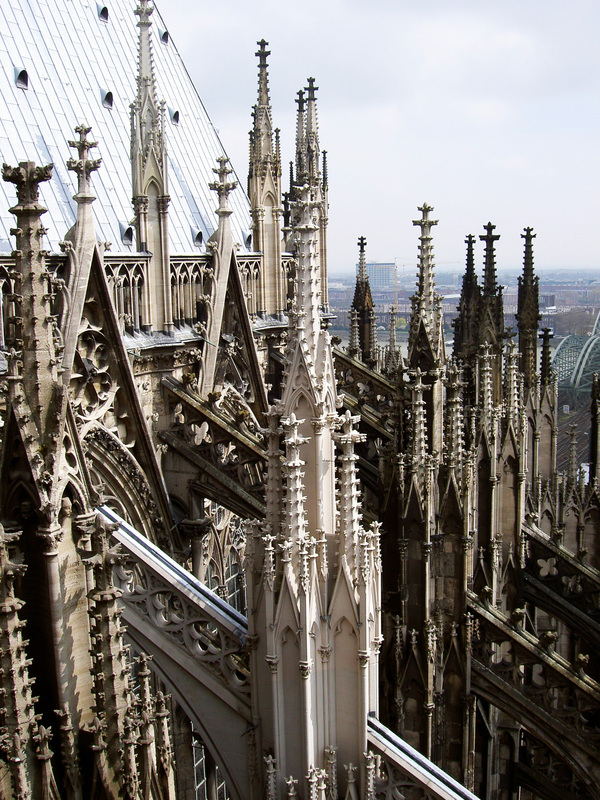 The flying buttresses and ornate spires of Cologne Cathedral, Germany — By User:Mkill — Own work, CC BY-SA 3.0, https://commons.wikimedia.org/w/index.php?curid=780939
The dungeon is divided into six isolated series of rooms, creating different barriers based upon the previously-encountered elements of the game. Forest, fire, water, shadow, spirit, and light are all condensed into microcosms of their respective temples, and common themes tie them to their parent structures; they are obstacles to once again be overcome, as they create an impassable barrier leading to the Tower of Ganon, which is the true resting place of evil. The actual tower is a structure within a structure, a hexagonal island of stone on which rests the entrance to the center of the fortress.

The bridge leading to the gate is of the black, webbed, white-flecked stone of the exterior, and it ends in a monstrous face that represents some unknown beast. A purplish-blue growth sprouts from the place where the tower and ceiling meet, and from this biomass the barriers are created and channeled. The six elemental passageways flank this larger room, and several staircases rise and fall around the outer part of the chamber. The doors make use of this hexagonal theme, and the temples’ respective medallions rest over each door. Each chamber-series is different in layout from the others, containing familiar traps and puzzles; however, they all share a common room at the end of the procession, where the snaking tendril from the larger mass outside terminates. The rooms are each distinctly colored with flames of their individual element.
The doors and linear arches of the outer keep; the portals play upon the hexagonal layout of the castle, while dangerous-looking designs embellish the archway and door frame. Notice the ever-present angularity and rigidity of the design.
Once the barrier is dispelled, entry to the inner stronghold is gained. The castle has, in total, five floors, which gradually diminish in size the farther up one goes. Each floor is roughly similar to all others, barring the utmost two floors, which are unique to the game. The initial three are equivalent in décor to the rest of the stronghold, with red carpets, dark brickwork, and the same violent-looking embellishment around archways and doors. Each floor is centered around a circular room, in which a battle takes place; two massive passageways in each are barred off from entry, and the focus is on directing passage up to the final story.

The last chambers and staircases are replete with enormous vertical windows of varicolored stained glass, highly evocative of a Gothic interior. They rise through two stories of this complex, and the larger ones are separated by the floor of the topmost room; letting in a dim light, the windows are richly detailed, and consist of a red trim with green and yellow interior glasswork.

As if playing into the theme of a Gothic cathedral, the music is that of a church organ. It begins simply, and, like the architecture of the larger movement as well as this specific structure, it rises. It does so slowly, gradually gaining in complexity upon the same theme. It becomes more feverish and hurried the higher one rises, as if reflecting the anxious state of mind that accompanies an impending final doom. Abruptly, it ends at the door to the final room.
But, unarguably, the most splendid room is the last. It is here that the larger stained glass windows come to completion on the high ceiling, and here that Ganondorf resides. This room shows the influence of several more modern schools of architectural thought (specifically Art Nouveau), with the sloping coves of the roof and a penetrating clerestory which takes the form of a series of arched windows. The ceiling is profusely paneled, with the central panel being of red and yellow stained glass, from which a medallion fluidly hangs. This room is a lovely fusion of two distinct schools, and gives the feeling of an industrialized church, or of the ceiling of a larger railway station; regardless of historical reflection, the impression it gives is one of powerful opulence and no small amount of regality. This castle is a beautiful confluence of design — dark, and yet kingly in aspect.