“People ask me, ‘What is the use of climbing Mount Everest?’ and my answer must at once be, ‘It is of no use.’ There is not the slightest prospect of any gain whatsoever. Oh, we may learn a little about the behavior of the human body at high altitudes, and possibly medical men may turn our observation to some account for the purposes of aviation. But otherwise nothing will come of it. We shall not bring back a single bit of gold or silver, not a gem, nor any coal or iron . . . If you cannot understand that there is something in man which responds to the challenge of this mountain and goes out to meet it, that the struggle is the struggle of life itself upward and forever upward, then you won’t see why we go. What we get from this adventure is just sheer joy. And joy is, after all, the end of life. We do not live to eat and make money. We eat and make money to be able to live. That is what life means and what life is for.” 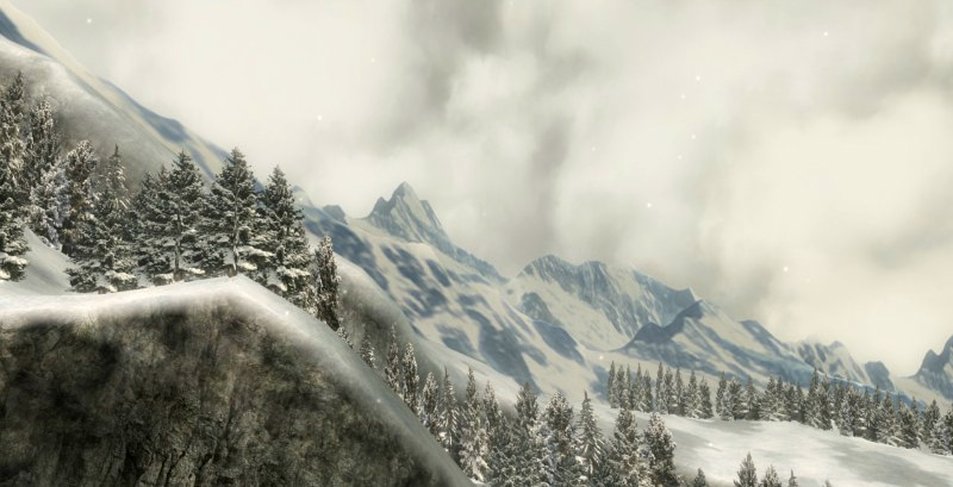 “One is in the snowy mountain heights . . .”
Mountains are a matter of proximity. From a peaceful, logical valley below, they appear changeless. Decades pass, as do centuries, and the snow-capped peaks seem to rest in stasis. But any climber knows that this is not the case when near to the summit. Ice gives way, snow buries tracks, storms alter the face of the mountain, and from hour to hour it is different. The winds come, day changes to night, and the realization hits that this terrain is anything but still. This is one of the beautiful, yet false, appearances of mountains — that they should mask such tremendous change with such monumental stillness.

Snowpeak is no different. The temperate Zoran climes quickly give way to unforgiving arctic winds and the blank canvas of white. The path upward is always treacherous, and never easy, but it seems to be one of those things that moves the human spirit ever onward. As Mallory famously said, the purpose of climbing is simply to quell “the indomitable desire to see what lies beyond the heart of man.” 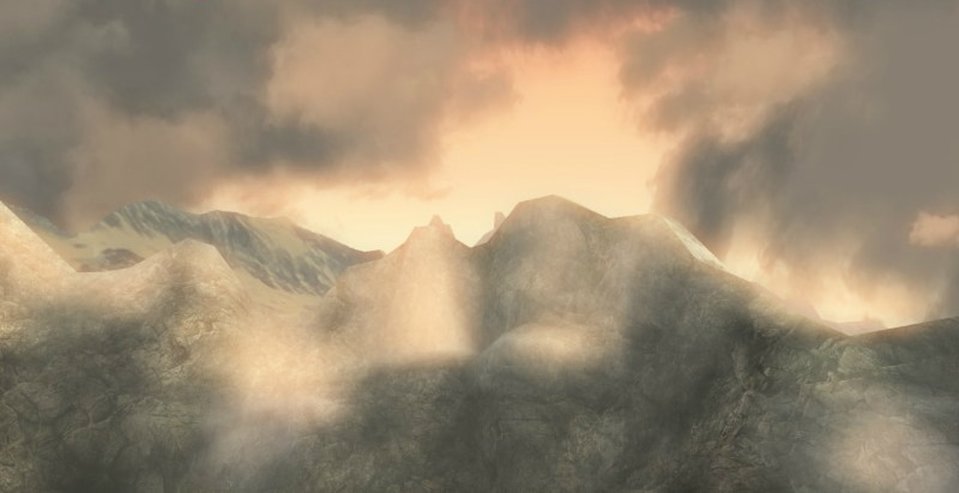 In this environment lies Snowpeak Ruins. This structure rests at an elevation far higher than any other within Hyrule, and its very existence seems a folly — as if those that built it were testing the gods by trying to survive in such impossible conditions. And it appears as though they were ultimately unsuccessful. The ruins are in a sorry state. The weight of time has laid low the walls and ceilings of Snowpeak, and winter has slowly crept back into its passageways and halls, quietly reclaiming what it once possessed.

But we can imagine the previous opulence of this place. Although we do not know why it was built, or by whom [1], it is clear that its owners had great wealth, power, and a vast experience of travel and culture. While its decor hints at it being a mansion, in layout it is very much a fortress. High curtain walls form a perimeter around an inner courtyard, and a tall central keep towers above the rest of the complex. Snowpeak is perched upon an outcropping of stone in the shadow of a large cliff, and is accessible only by a narrow bridge. The façade is low to the earth, and few windows can be seen from the exterior; this is likely tied to the need for insulation, more so than the need for light or defense. Most of the complex consists of two stories of flat, featureless stone, with square pillars demarcating the corners. The interior is sheltered by a steeply-gabled roof, which is normal for buildings in cold regions, as this precludes massive buildup of snow upon the roof and subsequent collapse. Four guard towers rest at the corners of the courtyard, and hold a commanding view of the interior court as well as the valley floor far, far below. The central keep towers above them all, however, and was perhaps the personal chamber of whoever was in command of this fortress when it was still in use; it is the only chamber to have such ornate windows and all the trappings of a bedroom inside. It is also incomparably more well-tended to than the rest of the structure, giving it obvious importance over other areas.
These three pictures show the approach to Snowpeak with its snow-capped roofs and towers, huddled upon an unforgiving promontory of rock. Most of the exterior is of plain, grey stone, with engaged pillars and carved stonework. The carved symbols are of particular note, as they are exactly those found within Hyrule Castle, tying this place to the Royal Family of Hyrule. These symbols, likely a family crest, depict two crossed swords upon a winged shield. [2] It is unknown what this location was intended for, but it is marvelously decorated and extremely well-stocked, which is a true sign that it was meant for royalty. 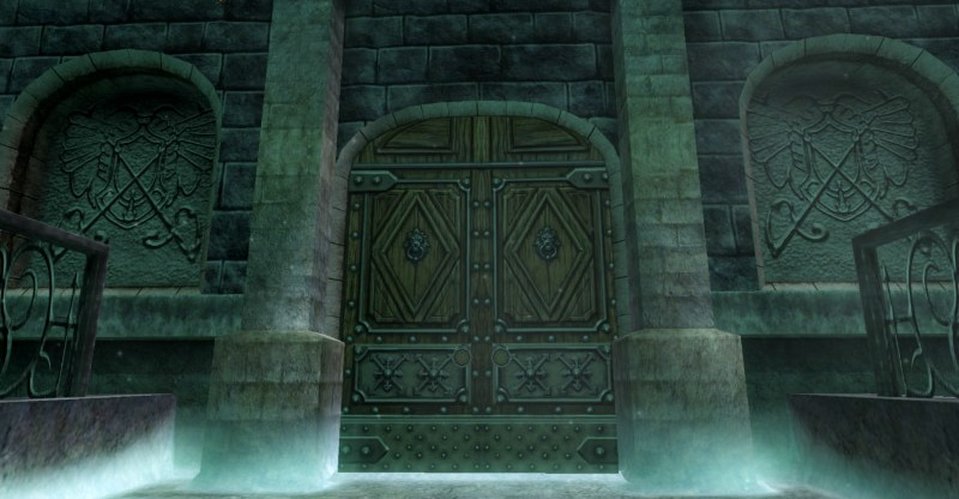 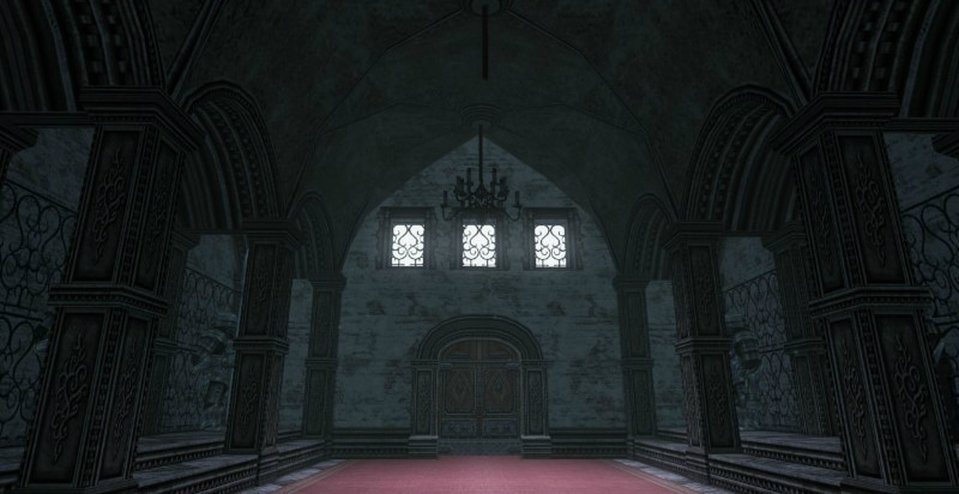 The entryway is as grand as that of any European estate of antiquity. For although it is a fortress, it is also a country manor. Past the thick wooden front doors, carved geometrically and adorned with metal studs and lion knockers, the traveler is greeted by high ceilings, beautiful, exposed beams, intricate woodwork, and sumptuous detailing upon every surface. A cold light filters in through three small windows above the door, dancing upon the red carpeting and forming myriad flickering shadows upon the wooden engravings. The floor and walls are made of grey and black bricks, and are matched with dark woods and delicate tiles near the floor. In the bays formed by the archways to either side of the entry hall are large suits of armor, complexly gilded with fine metals but bearing no known device. Angular vaulting lifts the room, giving it height and prestige, while curvilinear metal grating braces the walls, adding grace to austerity. Tasteful chandeliers hang from the ceiling, at about the same level as the two arcades, which themselves are carved elegantly even down to their supporting pillars.
Further into the main hall, it becomes evident that this place was certainly not built by the current Yeti residents. Like a Swiss chalet, the wood paneling upon the walls and pillars is exquisitely crafted, presenting a stark difference in design to the rugged nature of the brick walls. Both staircases leading upward have been partially destroyed, perhaps by time, and perhaps by the weight of overzealous Yeti feet. Once again, clearly this place was not made by such beings. The carvings upon the woodwork are likely derivative of folk artistry, showing dainty flowers and curving stems and vines. In such a frigid climate, these life-giving embellishments would be truly appreciated by those staying within the mansion. Huge candles adorn the far wall, framing a diminutive door and large crest done in red and gold. The wooden paneling takes on new life under the warm light of fire.
While the paintings may confuse us, what we do know, however, is that the range of scope of those in power here was great. These halls would have once housed a fairly large guard force, based upon the size of the kitchen and the extent of the storerooms full of weaponry and cannons. We also know that someone had exotic tastes. Cheeses and pumpkins from Ordon can both be found within certain chambers, and in conjunction with the paintings it becomes obvious that at least one resident was culturally literate — and highly so. With great wealth often comes expensive taste, and this is reflected by nearly every object in Snowpeak. Lavish time-pieces, heraldic symbols, leather-bound books upon wooden shelves, large fireplaces, chandeliers, and vaulted ceilings all hint at an aristocratic atmosphere. 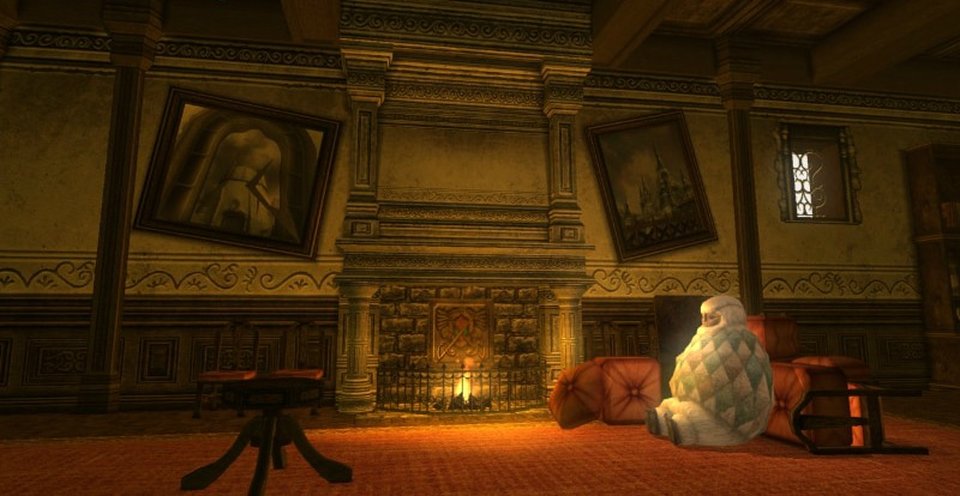 The Fireplace Room, in which Yeta sits pensively, is full of these aristocratic items. The fireplace is itself quite ornate, mirroring the facade of a building with its two stories of colonnettes, and marked with the Family Crest. While the paintings are askew, they fail to hide the decorated walls and woodwork, which show a great degree of craftsmanship. Exposed beams upon the ceiling match the wood of the supporting pillars, both of which lend warmth to an otherwise cold space. Below can be seen two different views of the interior courtyard; on the left is a perimeter turret, and the right image shows the capacious master bedroom. Looking carefully, we can see just how much of the roofing has collapsed under the weight of snow and age, warping in places and simply falling down in others. Some walls appear to have collapsed as well, and even sections of the buttressing for the main tower have fallen away in places.
The last location of interest within Snowpeak Ruins is a peaceful, contemplative one. Because this is a castle, and due to the religiosity of every Hyrulean culture, it is only natural that there also be a small chapel within this dwelling. The chapel is one of the larger rooms, and is very traditional in style. High windows, the glass long since fallen out, filter in both light and air, and a layer of snow covers the rug running the length of the center aisle. Pews line either side, and lead to some form of sanctuary, which is a separate room in itself, though much of it is visible through the two large windows on either side of the door. As there are no religious markings upon either edifice or embellishment, it is not known what religion was practiced therein. Yet, this room speaks to deeper human needs, and of a connection to the spiritual that is necessary even in the areas closest to heaven.

​At their most profound, the ruins of Snowpeak represent the human endeavor to triumph over hardship and struggle, and in this brutal yet beautiful environment they pass from one resident to the next, undergoing imperceptible, but ever real, changes. 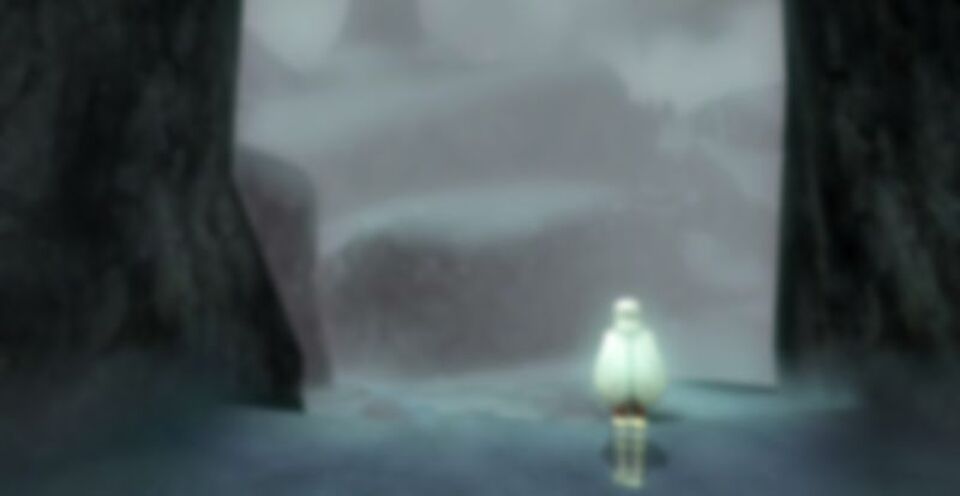 [1] In the HD remake, the sigil of Snowpeak Ruins, being the crossed swords upon a winged shield, can be found within Hyrule Castle, definitely binding the location to the Royal Family for the first time.

[2] The crest can be found in yet another place in Hyrule. On the lowest ridge of the path leading to Zora’s Domain from North Hyrule Field is a cave of ice. It consists of five small rooms, three of which hold a distinct puzzle, ultimately leading to a piece of heart. Magnificent arabesques glimmer from beneath sheets of ice, and torches set into the wall give the cave an air of the unknown. The decorations herein are reminiscent of those at Snowpeak. The weapons are similar in craftsmanship, yet the decorations upon their hafts are far more ornate within this cave. And here, not only is the coat of arms present. It exists alongside the crest of the Royal Family. In addition to this, the gates of this place are Zoran in nature — exactly like those found within the Water Temple. Perhaps this cave is meant to show the interconnectedness of all peoples within Hyrule. But because this cave yields little cultural clarity, it is impossible to extrapolate much based upon these findings.