The Fang & Bone — The Hunt Across Hyrule

"Recently I've been hearing about a suspicious guy named Kilton . . . He runs a shop called Fang and Bone."

While hunting monsters is a mainstay in most fiction — one need only think of guild quests in anime, or of the success of series like The Witcher and the myriad incarnations and spin-offs of Bram Stoker’s character Van Helsing — video games take this hunt to the extreme, and if a game is not solely bent upon the eradication of monsters or beasts from a kingdom or realm, you can be relatively certain that, somewhere, there is such a sidequest waiting for you. So too is this true of the Zelda series, where monster hunting has aspects of both hunting for sport and for spiritual absolution. These two variations seem to comprise the major types of kill quests present in The Legend of Zelda, and we can term them such: kill quests as purification and kill quests as occupation. In the first, various entities throughout Hyrule plead with Link to expiate their sins by purifying the land of what is usually a malevolent spirit or curse. In the second, someone effectively hires Link to scour Hyrule in search of monsters that can in turn be sold at a profit. In this type of kill quest, Link is but an intermediary who deals in sourcing and sales to prospective buyers; but in the first, he is an intermediary with a function more like a priest: he intercedes with doom on behalf of the powerless. And while the hunt is an aspect of both subtypes, their outcomes and aims are fairly different.

As I wrote in On Spider Houses and Greed within the Legend of Zelda, these quests to rid the land of evil beings are perhaps most obvious in games like Ocarina of Time and Majora’s Mask, wherein Link hunts down Golden Skulltulas in order to return avaricious humans to their original form — once cursed as they were by greed. In fact, the entirety of Link’s quest in Ocarina of Time could be seen through this lens of the cleansing of nature. [1] This quest for purification is present in other games as well, Jovani’s story in Twilight Princess stemming directly in theme from the House of Skulltulas. And while games like Skyward Sword subvert this trope in a way — Batreaux’s transformation into a human being granted not through purging the land of evil but through inspiring joy — the majority of such sidequests take the form of the hunt.
While Kilton and his quests are perhaps the most well-known of monster-hunts in Zelda, there is also his thematic predecessor, the Poe Collector. The Poe Collector haunts the adult timeline of Ocarina of Time, making his home in the abandoned Guard House in Hyrule’s Castle Town. There he sits on a lank bed surrounded by empty bottles and the tantalizing pots of yesteryear; above his head though is the true treasure: a cage in which float the souls of Hyrule’s Big Poes. Ten in total, Link must hunt them on horseback throughout the realm if he is to claim his reward. What differentiates this from other kill quests in Zelda is that there is no spiritual expurgation at the end; it is done solely for material gain — though whatever purposes the Poe Collector has for these souls, or to whom he sells them, is left unexplored. We do know, however, that the Poe Collector cares nothing for the health of Hyrule — in fact he wished for it to descend further into misery. [2] Like Kilton, he is a creature of business, though his darkness is perhaps a bit more obvious and overstated; it seems that Kilton simply loves monsters. [3]

Alongside Kilton, various other NPCs ask Link to engage in kill quests, whether to obtain an ingredient for medicine to save a loved one as in “Medicinal Molduga”, or simply as an aristocratic lark as in “Hobbies of the Rich”. There are also quests to kill the beasts which the landscape: Stone Taluses, Hinox, and Lynels. And we can see that all of these kill quests can be broken down into our two categories: kill quests as occupation and as purification. Some are to rid the world of a dangerous beast in order that people might live in safety, while others are sport-hunting with the end-goal of harvesting monster parts. But it is Kilton, in the end, who is the prime motivator of Hyrulean monster-hunting. Running his business out of a hot-air-balloon shop called the Fang and Bone, he is both everywhere and nowhere at the same time. [4] Once Link runs into him in Deep Akkala on an island in Skull Lake, he is able to appear at every major settlement in Hyrule — from Lurelin to Gerudo Town — at the same time. Keeping with the mood, the Fang and Bone is only open at night, from 9:00 p.m. to 5:00 a.m., and once the sun begins its daily ascent, Kilton pulls up his anchor and disappears, willing customers or no. 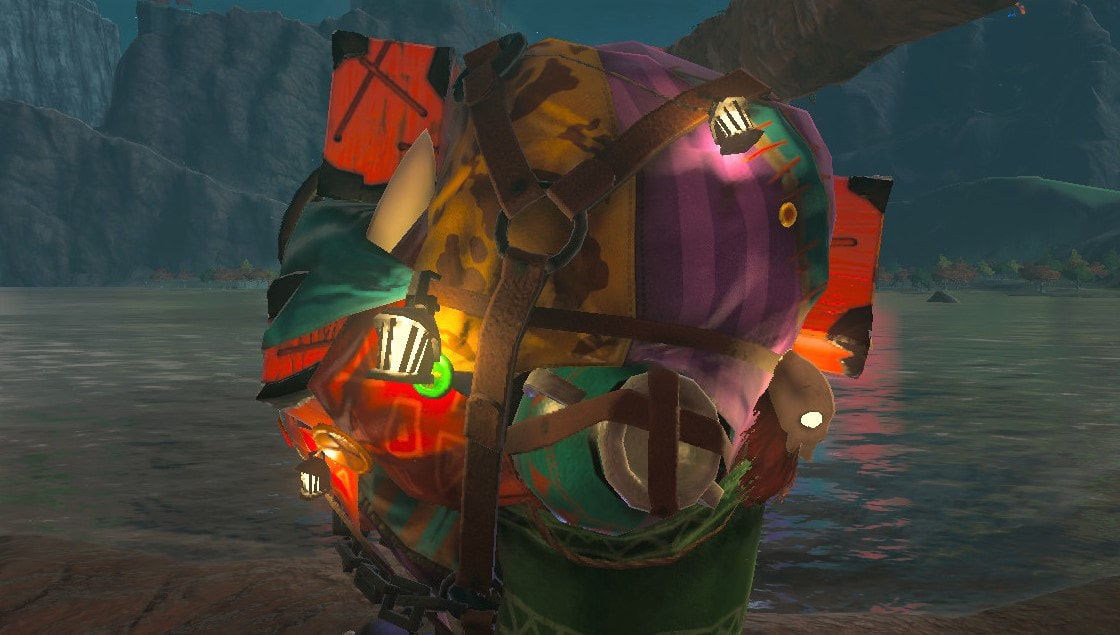 In terms of the actual shop, it is a delightfully-ramshackle hodgepodge of various colors, textures, and materials. The carriage (in which Kilton assumedly lives) is built of wood and metal, with large wheels and exhaust pipes; lanterns hang under the shop-desk, and purple curtains close off the interior. Skulls, chains, large belts of leather, and absurdly-sized buttons cover the rest of the carriage, above which is suspended an immense and glowing purple orb. While I would wager that this sphere somehow powers the balloon, we simply don’t know. It is held loosely in place by three strands of rope, and above it, connected by thick belts of leather, is the motley balloon itself. The balloon is interesting because it also seems to act as a place of storage, holding, as it does, several boxes, pots, and pieces of luggage. Lanterns hang at random from the leather belts, and underneath, laying over and under one another, are cloths of many distinct styles and colors. Giraffe-print atop Cheshire Cat, while 90s geometric fashion sits against respectable tapestry. The whole thing is indiscriminately kaleidoscopic, and it is wonderful. Whatever Kilton had in mind (or didn’t) when designing his shop, the outcome is something that is truly unmistakable: a shop as monstrous as the beasts he so fiercely loves.

Note: the creators of this video (which has the rare quality of being both brilliant and aesthetically lovely) write that there are three narrative lines throughout the game working at separate levels simultaneously; they term these the Adventure, Shinto (i.e. a respect of nature and ritual cleansing), and Growing Up threads. I’ve pinned the video to begin at the second narrative element so that you can get a sense of this larger purification quest with some stunning artwork and musical backing.

[3] "Mon is a currency I invented to destabilize the market and fight the establishment! Just kidding, there is no establishment in Hyrule! I just love monsters so much that I turned them into money! Here's the deal: if you bring me monster parts, I'll exchange them for mon. I'm the only business in Hyrule that accepts mon as payment! Pretty exclusive, eh? Anyway, you can spend your mon on various types of monster gear that I've created based on my research.”

Having gone so far as to invent his own currency to be used especially in the dealings of monster parts, Kilton is continually creating new items that Link can purchase; these range from style and clothing to cooking implements and weaponry. (If one can consider mops and springy hammers to be weaponry!) And, once Calamity Ganon has been defeated, Kilton begins offering Medals of Honor to Link, proving that he has dispatched all known Moldugas, Taluses, and Hinoxes in Hyrule.

Comment: I should note that it is an exceedingly odd display of love toward monsters to pay someone to hunt them down and “turn them into money”. This may be an instance of “cute aggression” gone terribly wrong, or his true love may just be collection — like a big-game hunter or overeager lepidopterist.

[4] “He moves the shop just outside major towns by using a hot-air balloon and only operates at night.”