The Temple of Time

The architecture of Hyrule is as variant as its peoples, with each culture expressing concepts and thoughts unique to it through the artistic medium of structure; the Kokiri live simplistically in commune with nature, the Gorons build lasting structures deep underground, the Gerudo hide themselves in labyrinthine passages, and the Hylians, the largest group of people in all of Hyrule, set themselves apart from nature, glorifying in the man-made, structured layout of their communities.

The design of the vast majority of their municipal, governmental, and religious structures is clearly derivative of a Northern European background. The temples, castles, and town squares hearken back to medieval settlements wherein the dominant structure, dwelling places of lords and ladies aside, was the cathedral. 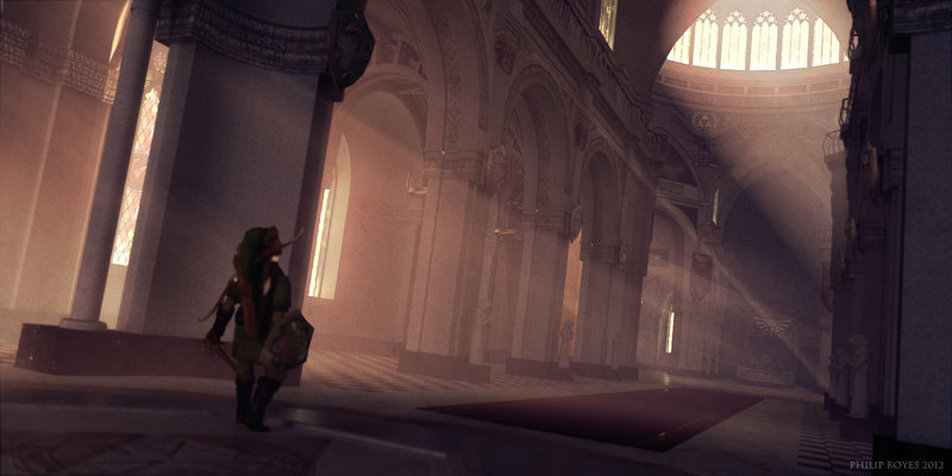 ​Artwork credit for all images in this article: http://janjygiggins.deviantart.com/
The Temple of Time is quite different from the normal conceptualization of a church as a house for the masses. Behind the façade of this holy place, there are no pews, no holy books, no religious paintings, no priests, monks, or nuns; no incense burns, no prayers are said, and there are no messages of enlightenment or redemption. In reality, this temple functions more as a vault. Largely, it contains only empty space, but for an altar, a locked door, a pedestal, and a fateful sword.

From the outside, this is a building of the Romanesque school, with few deviations. Its grounds are sparsely decorated, with a few flowers in the garden, two calm reflecting pools on either side of the entrance, and two tree-lined paths extending around to the back of the complex. The façade is relatively austere, its walls and towers broken only by a few arched windows and several string courses. This school of architecture exemplified the simple, believing that simplicity glorified virtue. On the front of this temple there are two main levels, each separated from the other by a plain, projected string course; this string course acts as the bottom of the second-story windows, and of the smaller windows of the towers. The windows of the upper level are separated by columns and piers, and rest above singular windows and the door of the lower floor. An image of the Triforce rests above the door, and a circular window in the central tower marks it as the most prominent of the three. From the side, simple buttresses come into plain view, keeping the windows in isolation from one another while giving strength to the walls.

The Song of Time, which accompanies this temple, is fitting to the image and evocation of an ancient cathedral; its male voices, sonorous and mystic, gently flow through the melody repetitively and thoughtfully. The theme is that of a Gregorian chant of the Western Roman Catholic Church — monophonic, unaccompanied, and moody, resonating beautifully throughout the acoustically-perfected space of a medieval church.

The inside is deceptively complex, and exemplifies incredibly important aspects of architectural history. As the predecessor to Gothic architecture, the arcades, groin vaults in the aisles, and beautiful clerestory are all archetypal of the Romanesque movement. The first view shows a golden Triforce elevated above the altar and door into the chamber of the Master Sword. Engaged pilasters of grey stone project the eye toward the high, ribbed ceiling, the chandeliers, and to the lovely clerestory of the second level. The windows here are actually a quartet of smaller, arched windows that carry three circles which interconnect in a clover-like (trefoil) way.

Historically, a clerestory was only able to be built after the invention of the groin vault, which is basically the intersection of two vaults at a right angle. This unit, this intersection, became known as a bay, and forms one of the basic structural components in cathedral design. That said, this temple is based around four bays, four vertical, repeated units inside the structure. Each unit here contains the clerestory window above a cusped Gothic arch, behind which rests a groin vault and the side aisle of the church. The diamond pattern found upon the vaults is echoed on the floor of the nave, and is flanked by the checkered panels in the side aisles. The windows of the main floor are plain in comparison with those of the clerestory, consisting of three pointed windows (lancet windows) within a larger pointed arch. The windows are separated by unostentatious piers with load-bearing pilasters. Lastly, the columns are octagonal in design, with bases that are both fluted and floral; they are built segmentally, with the capitals reflecting the bases, though these are square in shape, from which the arches spring. The light channeled in through the windows hits a highly-polished marble floor and reflects the inner elements of the building in a subtle yet beautiful way.

The final room, that which houses the Master Sword, the key to the Sacred Realm, is arguably the finest chamber in all of Hyrule.  It is certainly the one that provides visitors a perfect environment for pensive thoughts and individual contemplation. The entirety of it is of light grey stone, octagonal in layout under a grey dome, of which the skeletal pilasters and cornices are prominent. A solitary window, similar to those of the clerestory in the antechamber, directs light onto the focal point of the room: the Pedestal of Time. The pedestal is decorated by a medallion of each element, and it houses the device whose sole purpose is the destruction of evil.

The singular ray of light is the only thing not symmetrical in this chamber, resting slightly to the left of the pedestal, and giving the strange sentiment of time passing. Monuments like these are meant to stand opposed to time, to resist it, but in this instance, we have an edifice that does so while simultaneously housing and worshipping it. Only through this single opening are we shown the passing of days, seasons, and years. To be alone in this room, with nothing changing but for the position and color of the light, would truly be an experience. The passage of time is a relative experience unique to individual minds, and here, within such a monument, time would pass slowly, giving a new sense of meaning to the phenomenon, and allowing one to ponder what one is to do with the span which they are given. 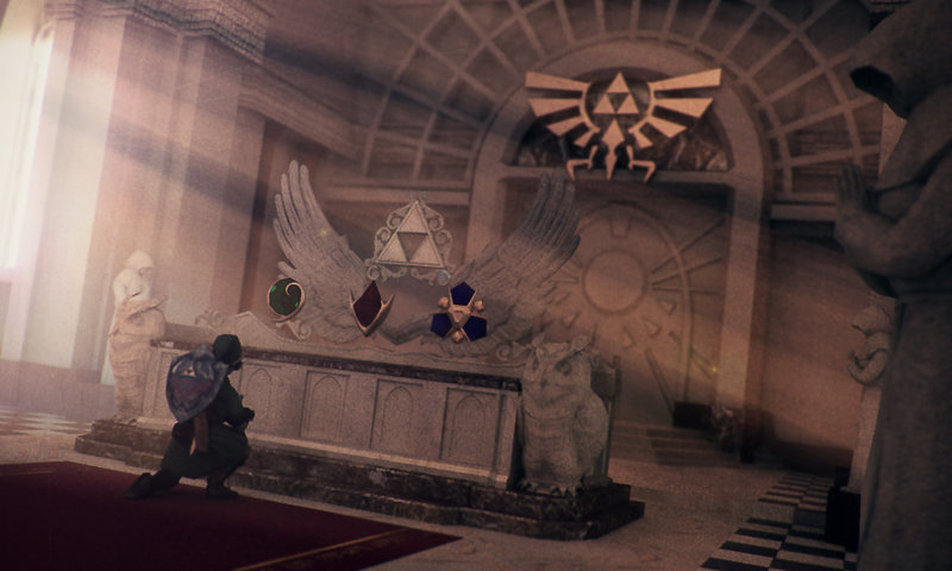