Faron Woods and the Forest Temple

“The ground was rising steadily, and as they went forward it seemed that the trees became taller, darker, and thicker. There was no sound, except an occasional drip of moisture falling through the still leaves. For the moment there was no whispering or movement among the branches; but they all got an uncomfortable feeling that they were being watched with disapproval, deepening to dislike and even enmity. The feeling steadily grew, until they found themselves looking up quickly, or glancing back over their shoulders, as if they expected a sudden blow.”

— J.R.R. Tolkien, The Fellowship of the Ring 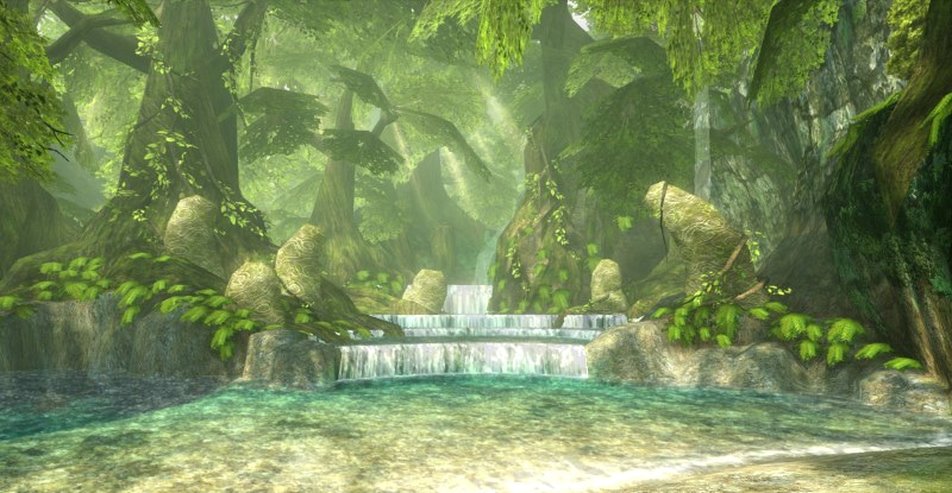 The above quote is from what is perhaps my favorite book, whose poesy, beauty, and effects upon literature are immense in scope. Yet this is not to say that the woods of Faron Province are full of disdain and hatred for those living beings that walk upon the earth; instead, it should summon the image of a vast and primeval entity that is elemental in nature and great in extent and power. More so than that, it should create the image of one that has awakened. Faron Woods, though possessing the color and feel of a relaxing sunlit afternoon, is otherworldly. Age emanates from its deep clearings, and the air feels close and substantial in areas where the boughs of trees hang low to the ground. A lazy light sifts through the canopy and dances upon the forest floor. Its musical theme is sleepy and furtive, reflecting its dormant yet commanding presence. Its paths wind through well-lit, soporific glades that charm and inspire, while the next turn may lead to noxious marshlands. To those in Ordon, these woods have an air laden with mystery and historied fear.

The concept of the forest as a place of liminality and transformation is not a recent invention. Faron Woods follows in a grand tradition of literature and commentary that clarifies and exemplifies the poignancy of this particular biome. The forest stands outside the bounds of the known, especially in ancient folklore, and is commonly a place of enchantment. It is to here that children flee, here that adventurers undergo trials, and here that entrancing beings of the fey are encountered. There is no one determined thing that a woodland portrays; rather, its unknown depths symbolize myriad strangenesses and magics, and, such is the fantastic nature of art, individuals may draw from it what they will. Dim paths through the trees led Dante into the Inferno, woodlands set the backdrop for countless German fairy tales as told by the remarkable Brothers Grimm, and they captivated Tolkien immensely — to the point that two trees gave light to his created universe for a short time. It is no small wonder then that Link, the hero of these games, is thrown into the midst of the woods in each title, and why the structures that exist within their confines are often among the most enigmatic of locations to be found anywhere in Hyrule. 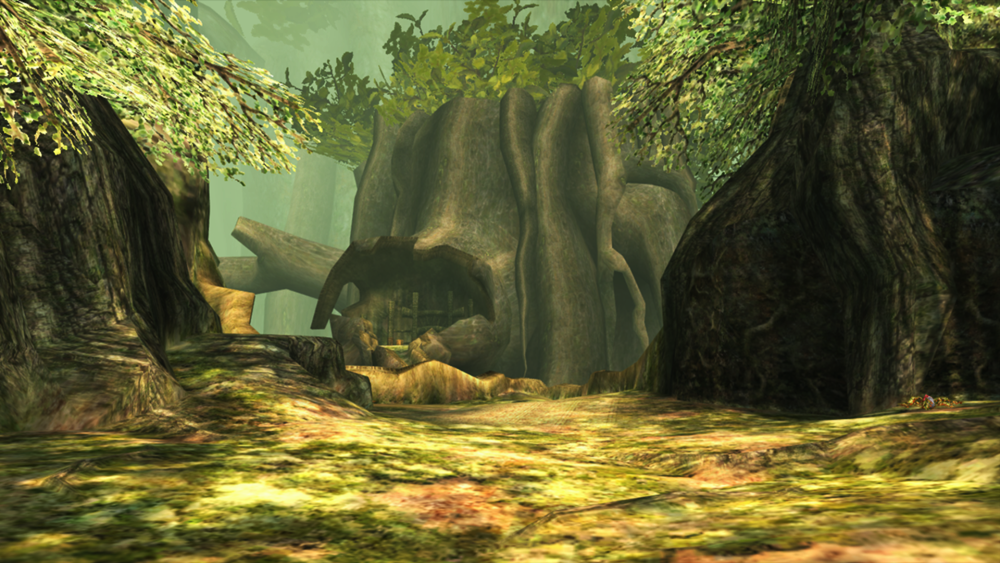 Above top: the path to the Forest Temple, whose entrance takes the form of a giant stump or root.
Bottom left: A door within the temple, into which is set the swirling image of the Kokiri, in a deep umber.
Bottom right: One of the primary motifs to be found within the temple: a simple flower surrounded by arabesques.
The only human to dwell within the bounds of the forest is Coro, a purveyor of lanterns and oil; apart from the curious monkey tribe that inhabits the Forest Temple, and Trill, Coro’s companion, there are no others. Those who live in Ordon hold the forest as a place of unsettling and nameless danger. As the villagers have had no dealings with the creatures of the forest within living memory, the people of the woods must have disappeared long ago. It is unknown as to the whereabouts of those that dwelled here before, whether they were the Kokiri or some now-extinct group of humans. And while we may not know those who fashioned the temple, we do know its function. This arboreal structure was built with the purpose of housing a Fused Shadow, though the rest of the forest seems untouched by the hand of humanity or any other sentient and adept species. In the ages since the creation of the Fused Shadow, it and those who initially protected it have been utterly forgotten.
Now, as for the temple itself, it is comparatively the most tribal and animistic of any other wooded sanctuary within the series. In many ways, this makes sense, as the woods of this province seem like a jungle. Arrayed around a vast central trunk, a large system of roots and branches creates the exoskeleton of the dungeon. Many have envisioned this temple as all being held within one immense tree, but it is better seen as a hypothetical mangrove: offshoots of the main tree roam and stray and connect to one another, and in many places the bark has dried and shattered, allowing beams of light to flow inside. Natural, and incredibly windy, corridors between the different branches are spanned by ropes and bridges. Because this site was chosen as a holy protectorate, it begs the question of why it was chosen out of all spots in Hyrule. If we return to the genesis of the series in search of reasons, there are some obvious connections. Within the Faron Woods of Skyward Sword, the landscape is dominated by a singular life form — though this is just speculation, of course, it is not far-fetched to assume that they are one and the same. If this ancient tree, or even just its desiccated shell, survived until the time of Twilight Princess, it would indeed be among the most primordial and legendary entities in the land. With such a tradition at its foundation, this area would be a perfect choice to house such a strange and malevolent power. 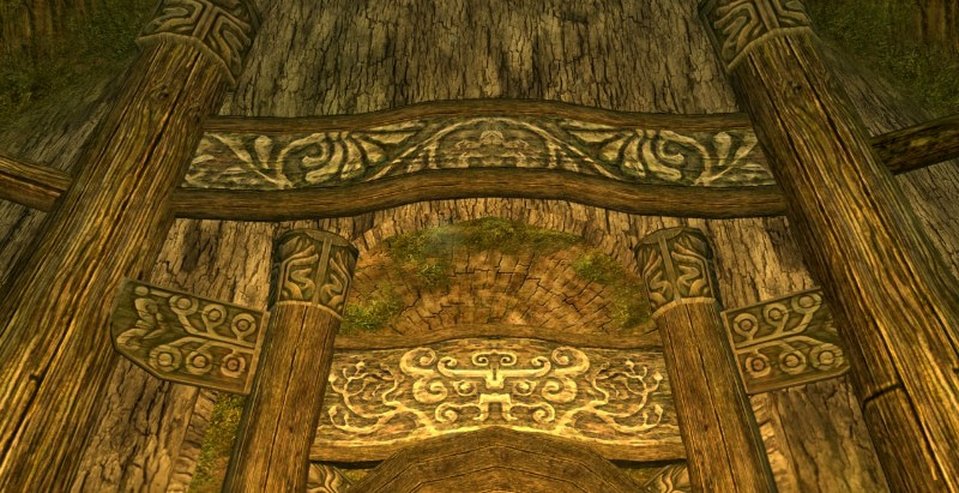 Above: Three distinct and decorative portals, each bearing individual sylvan themes. The topmost picture features bending flowers, stalks of grain heavy with food, and, most curiously, a humanoid figure which may represent a member of the monkey tribe, in between two parted trees. The lower-left picture shows a complex net of woodworking, fully etched with writhing roots. The lower-right picture features the distinctive capitals within this temple, bearing a short flowering plant, framing the same lintel seen above. 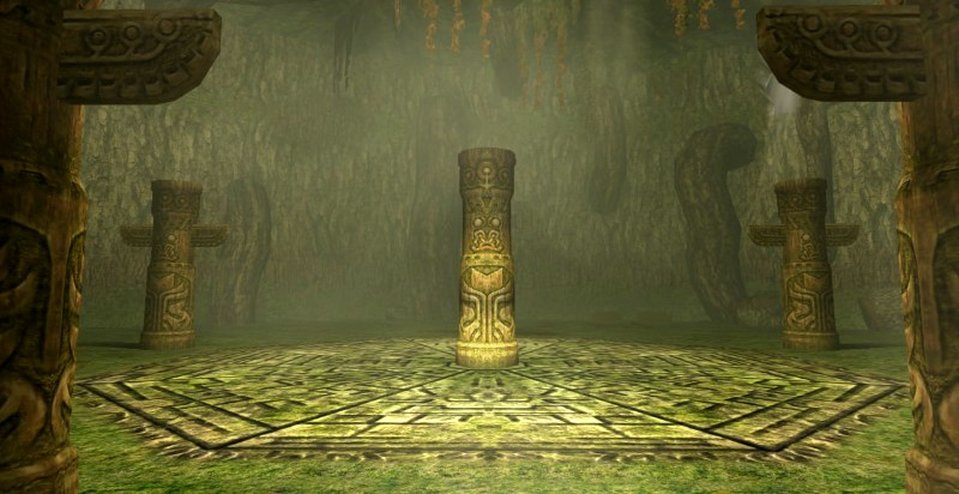 The temple embellishments are all constructs of wood. The columns, platforms, and doors were all carved into being some time ago, and the entire complex shows the wear of centuries of time. Woody shrubs and plants show up upon the bases of columns as well as upon the lintels. Similar in tradition to the upper levels of the Forsaken Fortress, as well as Outset Island, the totem poles of indigenous peoples display prominently in many rooms. The most obvious poles are those in the antechamber to the temple; these, like the others, have spread wings which are not dissimilar to those that surround certain doorways in the inner temple. The importance of totem poles is well-known; created to immortalize history and culture, as well as to personify spiritual entities, the time, resources, and skill needed to make them are substantial. Such cultural phenomena are found in several real-world cultures, most distinctly those of the Pacific Northwest region of the United States, although similar creations have also been discovered in China and Korea. Most curious, however, are the Kokiric signs that feature on every door. Whether this insignia connects the area with the ancient Kokiri, who are ageless spirits capable of taking on different guises, or whether it was simply appropriated by those that built this sanctuary is ultimately unknown. [1]
The two pictures above dispel the notion that this temple is, in fact, within one giant tree; rather, these windy gaps between chambers show the temple to be a vast complex that winds between several different structures.
Once again in this series is a connection drawn between wind and the forest. In Ocarina of Time, the Forest Temple was originally designed as a Wind Temple (hence the non-arboreal medallion given by Saria), and in The Wind Waker, the Wind Temple takes a form and coloration quite in likeness to the Faron Woods of Twilight Princess. Apart from the received weapon, the Gale Boomerang, wind is an integral part of the mechanical operation of the dungeon. Wind drives the movement of both doors and bridges, and although the windmills lack the sophistication of those found within the Wind Temple (being of metal and significant height), they add yet more mystery to the untold story of this place.
Above Left: the oddest image to be found in the HD remake. This carving, only found upon the lower part of the wooden pathways of the Forest Temple — well out of sight — seems to depict a butterfly or moth, with a skull at its base, below which hovers an inverted Triforce. The inverted Triforce is usually a symbol connected to the Kingdom of Lorule, though it can also be seen as a perversion of that which was left by the Three Golden Goddesses. To find it here, in a Hyrulean temple, is most strange.
The beauty of a forest can only be discovered by proximity to it. Pictures do a fair amount of justice, but only a proper exploration yields the soul-swelling feeling of such a commune with nature. After all, each forest is the outcome of its particular terrain, climate, soil, and species, and these aspects culminate in the hues, vistas, and loveliness of an individual forest utterly unique unto itself.

[1] With the publication of the Zelda Encyclopedia, we now know that the Kokiri Forest of Ocarina of Time is indeed the same forest called Faron Woods in both Skyward Sword and Twilight Princess. This connection provides ample reasoning for the existence of the Kokiri Crest seen within this temple.