“It’s been a while, boy. You have done well to sneak into my fortress and wriggle your way all the way up here. I suppose the least I can do is commend you for your reckless courage. My name is Ganondorf . . . And I am the master of Forsaken Fortress.” 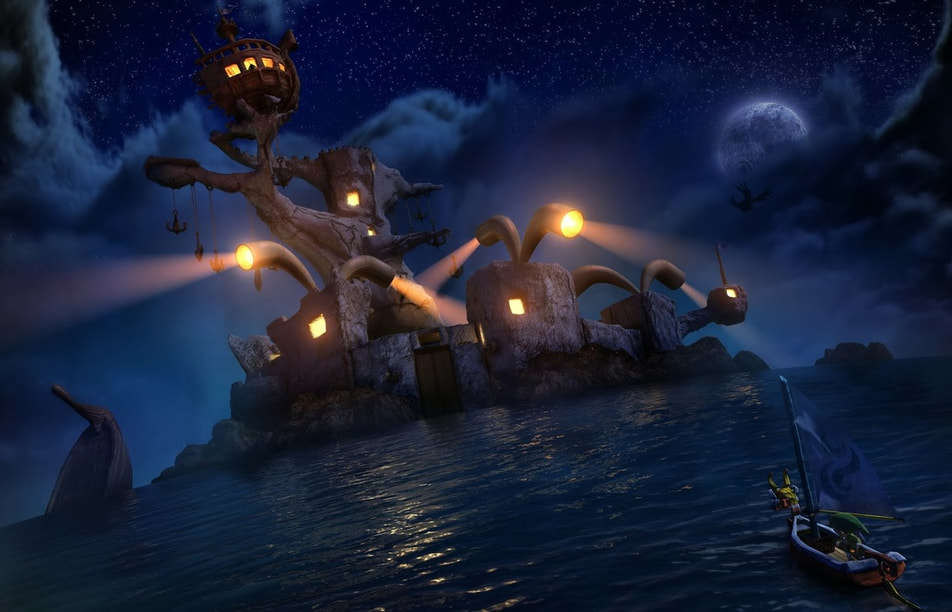 Picture Credit: Luke Gonet at http://magicwaffles123.deviantart.com/
Once a fortress of pirates located in the farthest regions of the north, what is now known as the Forsaken Fortress is the main outpost of the forces of darkness during the Era of the Great Sea. While the erstwhile inhabitants and creators of the fort have passed from living memory, it is speculated that, due to the relative positioning of the complex, it was built by the Gerudo that fled to this area, it being the highest of mountain peaks in that region of the world. [1] Since that time, it has been the chief dwelling place of thieves and pirates.

In appearance, the Forsaken Fortress is many things: it is a prison, it is a sentry tower, and it is an immense stronghold. The sea surrounding the fortress is replete with jagged rocks which jut out from the water, and the hulls and masts of destroyed ships are seen partially submerged a short distance from the shore. The structure can basically be divided into two distinct parts. The lower portion is a ring of curtain walls which surrounds a small harbor and courtyard, while the upper levels connect various turrets to the keep, being the tree-like construct upon which Ganon’s chambers (in the form of a ship) rest almost nest-like in the branches. The arboreal shape of this upper tower seems to be purposeful, as it also houses the Helmaroc King’s nest.
​
The primary functions of this haunted isle are surveillance and imprisonment. The towers in the ring of wall are all topped with colossal spotlights, which survey the inner courtyard as well as the waters near the coast of the island. The tops of the walls are crenellated, the windows are raised high off the ground, and the shapes of cannons can be seen emerging from the stonework of the courtyard and tower. While the prison itself is contained within the higher levels of the main keep, the entire perimeter is kept under close watch, with all walkways and halls having multiple patrols. The layout of the fortress (being pentagonal) is very similar to that of the Pentagon, which houses the Department of Defense of the United States of America; its highly angular design is meant to be insular, protected, and reminiscent of ancient citadels. The walls are sheer, and the entrances few.
​As is normal with many types of older fortresses, this one displays many archetypal aspects of defensive architecture: high walls, crenellations, and scarce windows; in this instance, searchlights and a massive surveillance tower feature most prominently. Also notable are the lines of the walls, arches, and portals; they seem neither angular, nor curvilinear, but random and asymmetrical.
The materials and construction are ramshackle at best, primarily consisting of a dark and dreary stone stacked without a thought toward symmetry; the windows try their very hardest to be square, and the doors and gates reveal gaping cracks between the boards. Perhaps the masons behind the construction and design of this bastion were either steered toward a very unique and organic architecture or were forced into indentured servitude, and sought rebellion through their work. 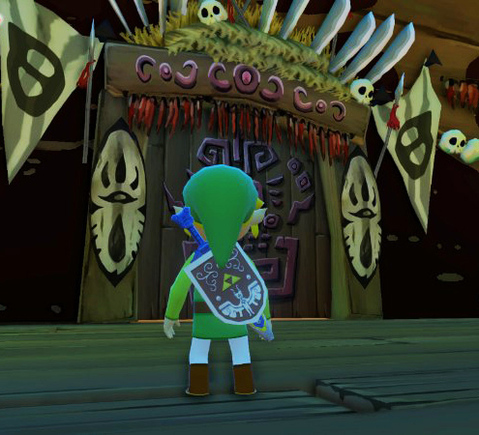 The door to Ganondorf's room strikingly contrasts the embellishments of the rest of the fortress, and it may be that the ship that forms these chambers was previously decorated in this fashion. The interior is an open-air chamber which consists largely of glass-less windows and wooden posts. The torches are designed to look like skulls, and a large part of the room lies in disarray. It should be clear that these are but temporary quarters for his darker designs, and that his time within this fortress has thus far been short. If anything, the lack of grandeur and the dilapidated nature of the Forsaken Fortress should give the impression of this location as a makeshift outpost instead of the heart of a would-be kingdom.

The doorway into Ganondorf’s chambers is heavily tribal, with thatching above the lintel, decorative skulls and feathers, a door with the markings of a mask, and oblong shields depicting what is almost the Eye of the Sheikah; the interior also follows this motif.
Notes and Works Cited:

[1] "The Gerudo Fortress in the desert is now the Forsaken Fortress, fittingly occupied by Ganondorf."