Toward the end of The ​Wind Waker, the powers that be allow exploration of the beautiful landscape of drowned Hyrule. The pathway to Ganondorf's fastness is lined with ruined buildings, destroyed walls, and worn-down columns, all of which arouse images of ancient Rome — a parallel which was drawn in the first article concerning this game. The Hyrule that exists under the rolling waves of the Great Sea is a land literally frozen in time, until the rise and corrupt meddling of Ganondorf. When the barrier surrounding Hyrule Castle is dispelled by the fully-awakened power of the Master Sword, and the familiar black fortress looms above the mountains on the horizon, the Hero rises to the final assault upon which rests the fate of all those living above. 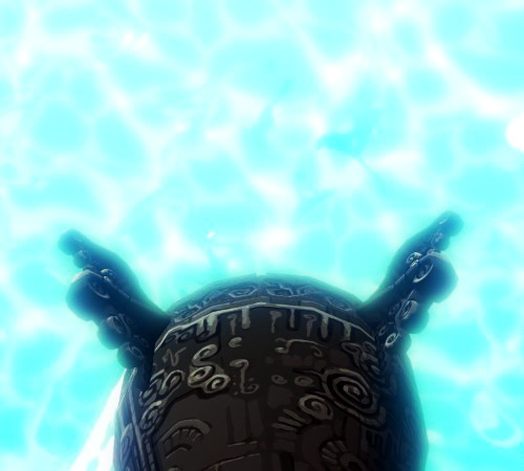 This tower shows continuity with the Gothic castle found at the end of Ocarina of Time, with its basic layout, but its design follows an entirely different tradition. This school of architecture and design is that of one of the most magnificent cultures on earth, having existed for thousands of years, and was for centuries the largest force of cultural dissemination within Asia. Inside and out, with necessary disparities unique to the civilizations and history of Hyrule, this tower is of Chinese influence. The basic shape of the tower, at first glance, looks like a cauldron. And that is exactly what it is. It is a Chinese ding (鼎), which is a vessel from ancient antiquity used for storage, divinatory ceremonies, and the preparation of ritual offerings. [1] Many of these vessels were large enough for the sacrifice of entire animals at a time, both indicating their size and the monumental importance of ancestor worship in ancient Chinese culture. Ownership of a ding, particularly one of heavy metal, was a symbol of power in the early days of Chinese society. With this in mind, it is logical that this model was used for Ganon’s keep. We never get to see the lowest portion of the tower, so it is impossible to know whether or not the bottom matches that of the vessel shown below, but the remainder of the castle suggests that it might be. Indeed, the first room entered contains a circular pool of lava, which would perfectly correspond to the belly of the cauldron, conveying the sense of being held over a fire. The designs on the outside bear resemblance to the shells of aquatic life, and the pattern around the lip (as well as the four sets of wings near the top) is one of floating clouds, a favorite theme in Chinese art, realized here in the spirals set in low-relief. The dark color also hints at cast-iron, corroborating this theory further, as well as entrenching it strongly within the earliest centuries of human civilization.
Within the complex, the first level is nearly a direct conceptual copy of Ganon's Castle from Ocarina of Time. This central chamber serves as a nexus of differing routes. Four different paths are open to the Hero, and these are heavily based upon the designs of their previous respective temples. Each doorway, and its subsequent rooms, presents small challenges and a secondary incarnation of each temple’s boss. The central chamber, representing the belly of a vat, consists of several stone platforms connected by rope bridges. It is natural and rugged, with minimal embellishment. When all trials are overcome here, the door opens and yields its hallways and further tribulations.
Staring down this initial corridor reveals further elements of Chinese design, most notably the ascending scale patterns upon the columns, which helix upward to the ceiling. There are many styles of this type of dragon column — some are of simple scales, while others show entire dragons flying through forests of clouds. And though they are not profusely featured in Chinese architecture, they still grace the facades of many temples. The columns in Ganon's Tower rest upon large bases that are even with the stonework of the lower wall; this stonework depicts an eye, repeated and encased in a fluid white stone. The rest of the masonry is of large grey rock, which also forms the barrel vault of this passage. The archways echo the cloud motif seen elsewhere, and below, a familiar red carpet is underfoot. This corridor portrays a confluence of composition; it is of an imperial Chinese splendor, but with notions of persistent surveillance and the evil that emanates from Ganon.
At the end of this passage is the section of the dungeon referred to as the Illusionary Room, which is the residence of Phantom Ganon. It features heavily a maze, and relies upon darkness and confusion for its effect. Its initial puzzle is one of order and memorization in a room displaying the stone images of the previous bosses. An undulating, serpentine line of stone circles the room, pretending to be the backbone of a large snake. The room is lit from above by the candles which illumine the effigies, but Link must descend into the lightless hole in the center of the chamber in order to progress upward. What is to be seen in the following series of rooms is nothing short of macabre.

The labyrinth below consists of a series of tholos structures with four doors each, leading to the four cardinal directions. Each room has a dome which is reinforced with many load-bearing pilasters that take the form of vertebrae; the spines are connected by a stringcourse of extended ribs, and the lowest sections of the backbones hold aloft the skulls of some indistinguishable beast. This area does nothing to hide its symbols of death. Instead, it brings them to the foreground, even to the point that they become vital for the structural integrity of the building itself.
Similar to the castle at the end of Ocarina of Time, there is a lengthy staircase leading to the personal chambers of Ganondorf. As Ganon is a spirit reincarnated in each age, his character and preferences remain largely unchanged throughout each manifestation of his evil. His desire for power, control, and overwhelming strength fuel his campaigns, and his hatred of that which lies outside the bounds of his dominion is undiminished with each rebirth. Even elements of his costumes and fortresses are passed down throughout time, showing the continuity and potency of the curse laid upon Link and Zelda by Demise at the end of Skyward Sword. That said, there are obvious contrasts of design based upon the art styles and cultural influences of each game. For instance, whereas the stair in his Gothic structure was one of a winding nature, this one, echoing true Chinese imperiousness, is extravagant and axial. Even the gate at the top uses the colors of regality — gold plating upon a deep red. This is the ascension to the throne of the Emperor, who was in days of old nearly a god himself. Likewise, Ganondorf is the self-proclaimed emperor and god of this land.
The pinnacle of the tower is capacious and austere. A simplistic Chinese design comes to its high point within this room, from the pool of water on the floor to the red, intertwining rafters above. The tan, oddly-cut stones with white mortar separate the coiling body of a great green dragon, which is itself trimmed in red and gold and segmented by bulbous red pilasters. The height of this chamber is prodigious, and the concealed upper parts create a perfect hiding place for a puppet master. Indeed, the ensuing battle is a series of puppet creatures controlled from the areas above. At the top, something like a viewing box, as those saved for the wealthy attending a performance, watches over the interior while also allowing access to the exterior. The final battle, as in previous games, takes place at the peak of the fortress, giving a wide field of view of the surrounding lands. This serves to give perspective to what is at stake, making the situation more direful. With a roof of ocean water directly overhead, a hidden and stagnant land encircling the tower, and a mass of stone limned with the symbols of clouds and wind beneath the feet, an incredible feeling of gravity seizes the imagination and lends itself to the idea of a battle fought throughout time in which there is never a definite victor. For whoever wins can only achieve a temporary, fleeting victory that will yield only more chaos and uncertainty in the future.
Works Cited: