Ordona Province & The Meaning of Twilight 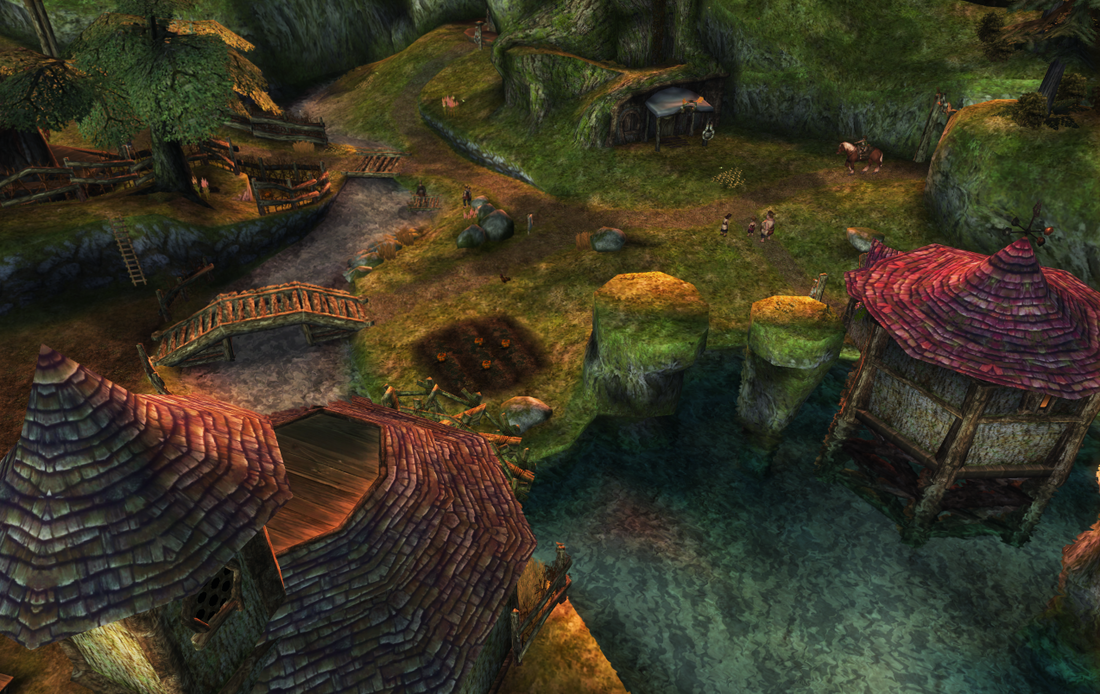 Twilight is the hour that sets the human heart yearning. The lingering light is a herald of the fall of darkness, and its subdued and quieting gleam wakes memory and wistfulness from their daytime repose. For as tranquil as a gentle dusk appears, that which it evokes is also somber and melancholic. Hovering on the edge of night, umber hues fade into a more shaded palette that is swiftly followed by the coming of a sable sky clad with stars.

This daily sequence is a metaphor of death and rebirth, and many have written on its power and nuance.

James Ellis: “Twilight is like death; the dark portal of night comes upon us, to open again in the glorious morning of immortality.”

Thomas Cole: “How lovely are the portals of the night, when stars come out to watch the daylight die.”

And yet it is also the hour of appreciation, peace, and contentment.

Henry Wadsworth Longfellow: “What heart has not acknowledged the influence of this hour, the sweet and soothing hour of twilight, the hour of love, the hour of adoration, the hour of rest, when we think of those we love only to regret that we have not loved them more dearly, when we remember our enemies only to forgive them.”

And one of memorable color.

James Thomson: “Of evening tinct the purple-streaming amethyst is thine.”

Vladimir Nabokov: “The cell was filled to the ceiling with the oils of twilight, containing extraordinary pigments.”
Nabokov’s oils of twilight — Angkor Wat at sunset — Photos taken by the author
If the quotes were many, it is because I think something within them is incalculably important to our coming discussions. All these feelings, given new life during this time of desperate illumination, are very much at the heart of Twilight Princess, and without adequate respect and thoughtfulness for this exploration of beauty, emotion, description, and the intense struggle of poetry and communication, little can be drawn from this masterwork. I urge that this game be played in moods of introspection and calmness, as suggested by the inclusion of rather purple poetic verse. There are a few critical elements that are present in the quotes above that are necessary to our discussion, and which all pertain to the human experience of twilight: these are the accompanying conflicts of temperament, reverence for the colors of sundown, and a tendency toward higher thought with concomitant inaction of body. All of these concepts hold great significance throughout the game, and without mindfulness of them, the game is little more than a vessel for trivial enjoyment.

People are constantly at battle over their opinions and feelings, and even in Hyrule, people have mixed thoughts concerning the waning light. Indeed, it can be viewed as a time of fear, or it can be enjoyed as a time of tender catharsis. In the opening scene to the game, Rusl and Link sit beside an Ordonian stream, caught up in quiet conversation. “Tell me something,” Rusl asks.  “Do you ever feel a strange sadness as night falls? They say it’s the only time when our world intersects with theirs . . . The only time we can feel the lingering regrets of spirits who have left our world. That is why loneliness always pervades the hour of twilight.” This dialogue, even in its brevity, captures the essence of this game — one of differing conceptualizations, mindsets, and ideals. Instead of the duality of light and darkness, we are presented with a spectrum; and, in the area where the two touch and begin to blend, doubt and confusion dwell. After all, this evening hour enables light and shadow to momentarily coexist — when the two realms brush up against one another. Some within Hyrule, most notably Princess Zelda, hold that only gloom and depression can exist in such an atmosphere, but Midna and the Twili present a differing perspective — one of attachment. “Some call our realm a world of shadows,” Midna states mournfully. “But that makes it sound so unpleasant . . . The twilight there holds a serene beauty . . . You have seen it yourself as the sun sets on this world. Bathed in that light, all the people were pure and gentle.” We as gamers likely find ourselves caught somewhere in the middle of these two mentalities. Through the injunctions of powerful spirits of light, we are forced to feel as though the coming of twilight to the world is an evil, but we also come to love Midna, her people, and what she is fighting against — the perversion of something that she finds to be wonderful and sublime. The citizens of Hyrule only ever see the twilight of Zant, which confirms all their preconceived suspicions and terrors, and they fail to see the delicate half-light so loved by Midna. And with this in mind, the game begins. 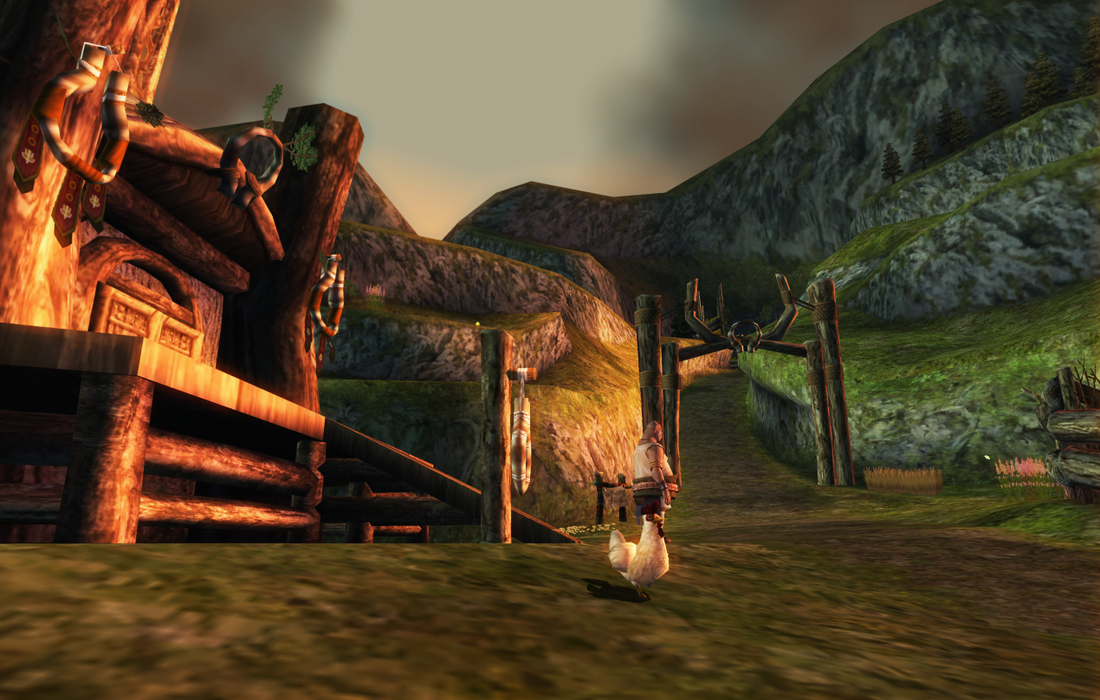 A few scenes from Ordon Village
Ordon village is an agrestic community enshrined in pine forests and mountain peaks. It is a settlement of pristine farmland, whose rustic inhabitants live comfortably, enjoying their commune with nature, yet at once setting themselves apart from it. In this alpine environment, animal domestication has thrived, and village life is heavily agrarian. Though not a part of the larger Kingdom of Hyrule, those living within Ordona Province are still distinguishable to those of other territories by their informal speech and distinctive attire. Ordonian products — their milks, cheeses, and pumpkins — have even found their way to the far-flung storehouses of Snowpeak Ruins. The lasting impression of this hamlet is one of warmth and satisfaction.

From household commodities, the state of the town is easily readable. Rocking horses, pictures, tapestries, waterwheels, wind vanes, ovens, potted plants, cooking ware, dolls, and a great many leather-bound books show that this village has long been at peace. There is no thought of invasion, although weapons are produced and a perfunctory watch maintained, and the townspeople have created an indulgent and comfort-driven society. In such a self-contained community, there is much time for leisure, and aside from the tending of livestock, few things need prolonged activity or focus. (An interesting side note: there exists a small agricultural town in southern Italy named Ordona, from which the characteristics and namesake of Ordon Village may be derived. Mountainous and forested, the region surrounding this city is also home to the only lasting expanse of Italy’s Black Forest. The Black Forest in this area is also called the Foresta Umbra, the word Umbra being derived from shadow. Both settlements, then, are pastoral centers in forested mountains that rest under a shadow, though of different sorts.)
Two views of Ordon Ranch
The dwellings reflect quintessential Kokiric elements, several of which are built directly into large trees. Most of the construction in this town is of wood, and uses the naturally-existing trunks and branches of the trees for support and embellishment. This is especially true of Link’s house, which stands a small distance outside of the village proper. It was constructed upon raised land, and built into the irregularly-shaped hollow of a living tree, whose branches can be seen weaving in and out of the structure. The wooden beams and floorboards of the house are raw and unfinished, and are unevenly cut. The windows also echo this design, containing no glass, and letting in a filtered sunlight through latticed woodwork.

Yet, not all parts of the houses appear purely natural, as they have a distinct purple tile that reinforces their roofing. It is a hybridization, probably due more to pragmatics than aesthetics, which results in this delightful appearance. Most homes in Ordon are individual units, creating visible boundaries between families. Along this same line, each house bears its own insignia, which is found upon the goat-horn crest next to each family's door. The emblem found above the doorway into Link’s house is a golden triangle, which likely hints at his destiny and past. Other houses bear the symbols of leaves, pumpkins, and cats. Because the raising and domestication of goats is the lifeblood of the village, they take a central role in Ordonian art and custom. They are found in pictures and tapestries, and their horns are hung upon every passageway entering and exiting the community. They are displayed prominently above the gates protecting the town and spring, both of which hold obvious significance for those living nearby. In this way, form follows familiarity.

The rugged terrain upon which the livelihood of the people is nurtured
Because of the protected surroundings of Ordon Village — the mountains and bridge-spanned chasm — there is little need to worry for safety. Time that was once afforded to creating the security of a settlement is now used to cultivate the many aspects of a defined culture, though one slow to change. Nothing pressing or foreboding lies on the horizon, so the townsfolk are at lasting peace. Higher thought and appreciation can only be born in a society that enables individual reflection, and the conversation of the initial cut scene displays that both of these experiences are well at work within certain villagers. What follows are realizations of one’s place in the world. Rusl knows all too well these fleeting contemplations: “You have never been to Hyrule, right?  In the kingdom of Hyrule there is a great castle, and around it is Castle Town, a community far bigger than our little village . . . And far bigger than Hyrule is the rest of the world the gods created. You should look upon it all with your own eyes.” And, in time, that is exactly what will happen. 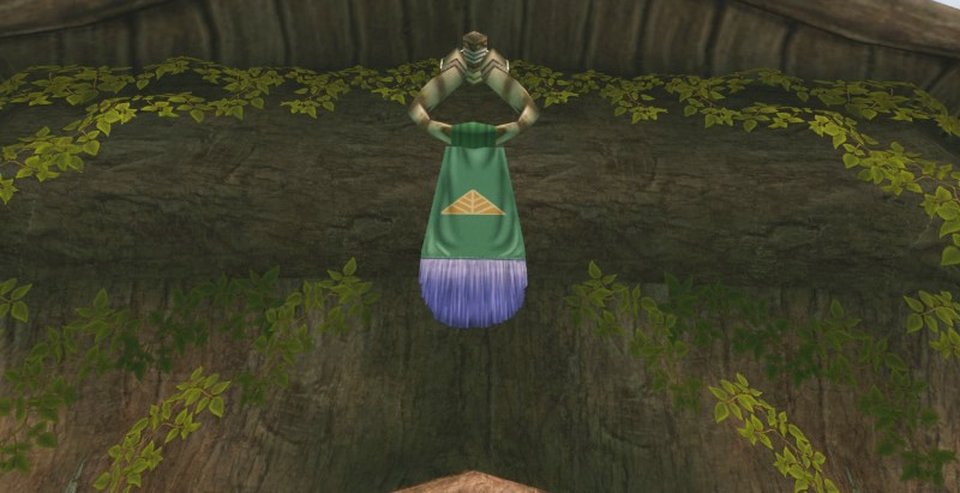 The emblem of Link's house: a golden triangle with ascending leaf pattern, upon a field of green.