“That’s because the Great Deku Tree is our father, the forest guardian, and he gave life to all of us Kokiri!”

— A Kokiri, ​Ocarina of Time

It may seem strange to seek to analyze the architecture of a tree, and for a long time I thought so, too. Yet, at the encouragement of a friend, we arrived at the thought that the strange structures and chambers inside the Great Deku Tree were simply too enigmatic to ignore. So, here is the fruit of that brief journey. 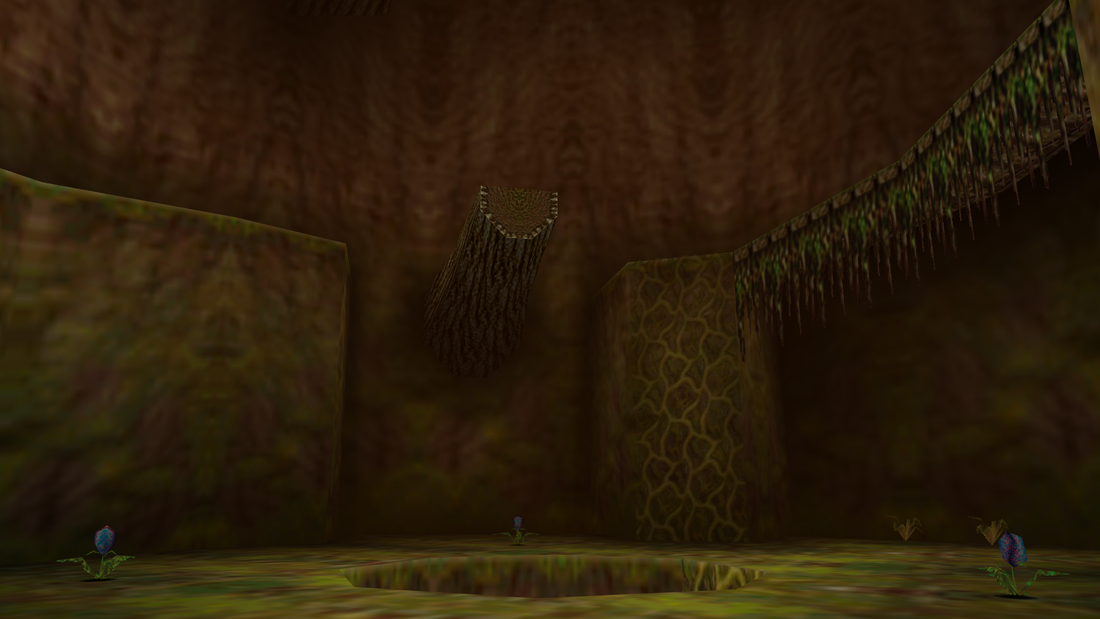 A spirit of both earth and growth, the Great Deku tree kept watch over the forest and all within it for countless ages until his death at the hands of a wicked man of the desert. Safeguarding not only the forest, his children, and the village they inhabited, he was also charged with the protection of the Kokiri Emerald, that “green and shining stone” given by the Three Golden Goddesses to the spirits of the forest.

It is before this ancient, venerable spirit that Link appears, having been summoned above all other Kokiri (what this felt like for him we can only imagine), in order to rid the forest’s father of his deadly curse. In protecting the Goddesses’ spiritual stone, this spirit willingly sacrificed his life, asking only that Link defeat the evil growing within him, a strange beast gnawing at his roots like Níðhöggr at the roots of Yggdrasil. As Link accepts his task, attended by Navi, who will quickly become his fast friend, the mouth of the Great Deku Tree opens slowly, revealing a yawning portal at whose threshold Link’s destiny irrevocably begins to unfold.
As the Great Deku Tree is presumed a motionless object, it is uncertain how the doorway to the inside is opened; whether this movement is under his full control, achieved through some form of magic, or evidence of an internal mechanism is unknown.
As Link stands at the entrance, bathed in a blinding white light, we are first struck by a melancholy sound — a low, almost elegiac, note that suspends itself throughout this vast and hollow room, expanding upward as the space inside is made visible.

“Striking the child most of all, however, was the resonance that pulsated within him. Without the aid of his ears, it was as though an ethereal and respiratory music sounded throughout his body, much in the way that the voice of the Tree had seemed to grow from inside the boy’s mind, rather than enter from without. Link paused briefly when he noticed the vibrations of the music, for it came so naturally that he at first was not sure he was hearing anything at all.” [1]

Much of the interior of this tree is natural, though the fact that it has been hollowed out by some force, and that such strange implements appear in nearly every room, is very curious. Coiling walkways of wooden boards, covered with the hanging moss and vines of many years of disuse, spiral upward along the outer wall, and thin doors of a dark wood studded with iron bolts dot the walls. The rooms hidden behind these doors are much the same as the large hollow without, being of hewn wood and growth that only humidity and light can create. Lit torches, treasure chests, and wooden platforms are all housed within, and, likely due to the curse, Skulltula webs adhere to walls and ceilings, presenting a stark contrast to the botanic nature of this space. 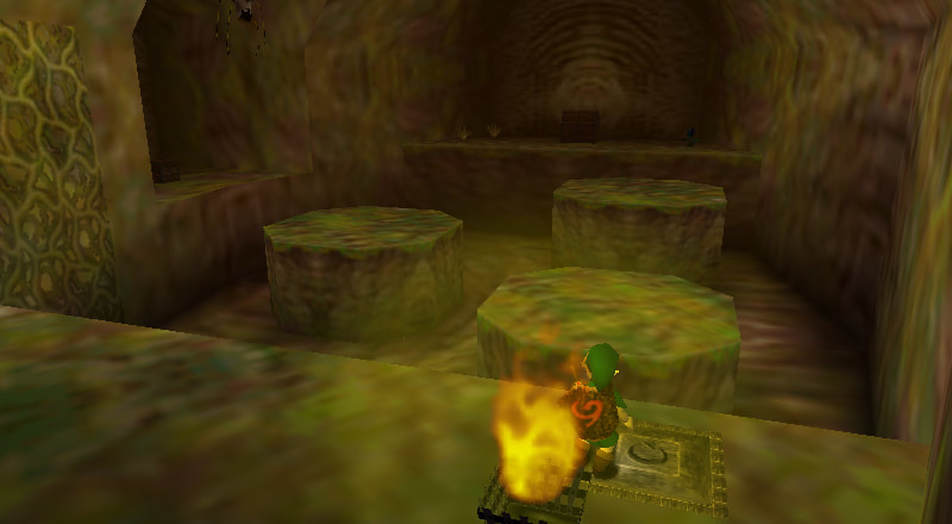 It is the lower levels that engender the greatest puzzlement, however. As these are below the Great Deku Tree himself, it is not strange that the walls should be made of packed dirt and stone, and that the great wooden roots of this spirit make subtle appearances around doorways. Yet, that these chambers should exist at all is what is most enigmatic. It is likely that the room directly beneath the main hollow of the trunk above was, at first, a natural cavern, evidenced by the highly irregular shape and the existence of an underground river. After all, such an immense tree would need a commensurate source of water. Wooden grates block passage on either side of this room along the river, and various torches, doors, switches, and carved blocks can all be seen. Strangest of all, though, are the two elongated passages that connect the floors of these lower passages. They are nearly circular in design, and transcend great distances underground. Clearly, these are anything but natural. The many rooms in this series of hallways continue to baffle, exhibiting tight crawlspaces, highly-complicated mechanisms for opening doors, and an elaborate defense mechanism in a room that has controls for changing water levels. Given these fortifications, any thoughtful hypothesis concerning this dungeon should contain the protection of the Kokiri Emerald.

Even so, such a theory seems incomplete. Upon deeper examination, given what we know of the Goddesses and of the cyclical rebirth of their Hero across the ages, we must take into account the concept of the Trial. In nearly every iteration of The Legend of Zelda, Link must undergo trying challenges in order to prove himself worthy of the title of Hero. The interior of the Great Deku Tree might have been created with this end in mind. Little happens by chance within these games, and foreordination leads each being to his or her end like so many actors upon a stage. It was not mere fortune that led a fleeing mother to this sacred forest, nor was it happenstance that kept her child here. If we view the Inside of the Deku Tree as an elaborate trial meant to test the ingenuity, determination, and self-sacrifice of a fated youth, our understanding of this place — of this spirit, and of his relationship with all life forms living within the forest — is enriched immeasurably.
Works Cited​:

[1] Excerpt from The Hero of Time, a novelization by E. Sharp