The Mirror of Demise

“You grow more fascinating by the second, human. I never imagined I'd meet one of your kind who wished to stand against me in battle. Very well, then. I shall prepare a place for us where we will not be bothered by distractions. If you still have the courage to face me, seek me there.”

​— Demise, Skyward Sword
​As Link follows Demise through the fey gate created for him, he finds something entirely unexpected. As the obsidian-purple vapors clear from his eyes, he sees a peerless blue extending in every direction to the farthest horizon, broken only by clouds and their soft reflections. The world has become a near-perfect mirror: a creation that has enraptured even Demise himself. [1] Slowly turning from his work, Demise gives an order to Link that is both revelatory and chilling: "Take a moment to appreciate your surroundings, for where we stand shall serve as your tomb for eternity." Looking around, as only the thinnest string delineates where heaven and earth meet and begin to reflect and echo one another, this moment of appreciation passes quickly. Soon the sky will darken into umber and leaden hues, and battle will begin. But during this fleeting moment of beauty, what has been made for us, and what does it mean?

The phenomena of reflection and optics, beyond their rich and pedigreed scientific history, are perhaps most rich when they are applied to humanity: for the mirror as symbol is one of mankind’s most expansive and profound images. And from early mirrors of bronze to today’s glass, these manmade tools have always had a natural complement: light on water. This imagery has been the ubiquitous subject of poetry for hundreds of years, stretching back to Japanese Zen-Buddhist writings [2], Chinese verse [3], and extending its influence to British Romanticism [4] and American Transcendentalism [5]. We are clearly in the presence of a powerful symbol, and it is likely that this homage was a factor in setting up the final battle of the most mythologically-loaded game in the series.

So, why a mirror? And, equally as important, why a mirror created from water?
Above left and right: Two phases of the battle with Demise.
It strikes me that this place is, first and foremost, meant to be a distinct separation from the commonplace. It is meant to sever all ties to a more standard representation of nature; it does this by multiplying simple natural elements until they assume an otherworldly guise. How, then, does this process of creating the unearthly from the earthly unfold? I think its effectiveness lies in two phenomena. Firstly, it is because this place bewilders, and then overwhelms, the senses. The boundless mirrorscape into which we are dropped is as disconcerting as it is beautiful precisely because it does not end. Like watching the ocean from a ship, its simplicity and allure swiftly give way to realizations of its immensity and unfathomability. And in this realm of Demise’s making, water and sky stretch limitlessly into the horizon, and the sky and its reflection seem to hold an infinite depth — so that we are left with an abstracted, cloud-spotted canvas in every direction. The second phenomenon concerns movement. The only movement springs from the clouds that drift about overhead, but since they are equally reflections in the water, the entire world — this mirror — is simultaneously both still and moving. This odd permeation of each element into all others gives a protean nature to this location, and it serves as another means of severing us from normality.

Given all of this, it is astonishing — perhaps even miraculous — that such places actually exist. Of course, one can see the trappings of nature reflected in any body of still water, but there are some locations on earth which trap the sky in near perfection — such that the boundary between the two is sometimes lost. The largest salt flat in the world rests at nearly 12,000 feet in southwest Bolivia. It covers roughly 4,500 square miles, and was once part of a larger prehistoric salt lake called Lago Minchín; as the lake began to dry up many thousands of years ago, it left several natural salt pans which form during seasonal rains, including el Salar de Uyuni, which likely served as inspiration for the Mirror of Demise. During the dry season, the basin is dotted with small piles of salt and large hexagonal tiles created as the water evaporates; but it is in the wet season, when a shallow lake forms, that the water meets the heights. On clear, still days, an impressionistic twinned image flows forth from above and below the horizon — a line that is lost because it has almost ceased to exist. Limited perspective has opened up into infinity. 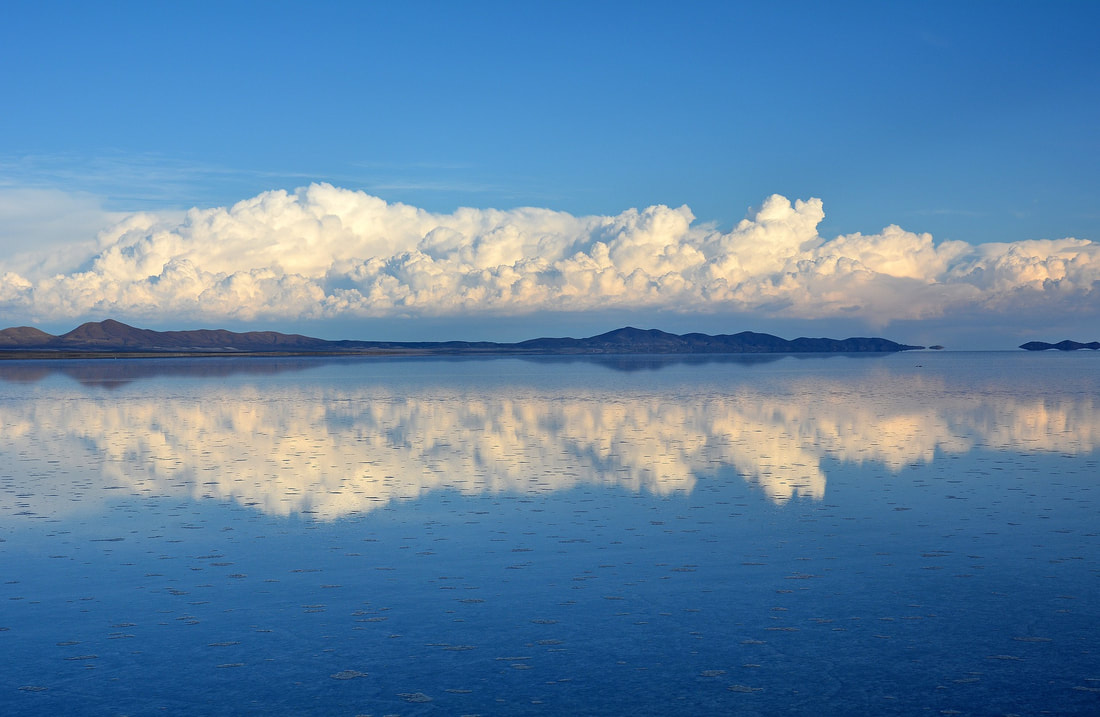 Above: El Salar de Uyuni in southwestern Bolivia during the rainy season.
There is perhaps a literary, thematic reason for the singular nature of this place, as well. Just as physical existence is echoed eternally in this mirror, it could be said that metaphysical existence will be equally looped — knotted as body and soul often are in Zelda. Just as the water’s surface returns the clouds, so too will the Curse of Demise resound throughout the ages, and humanity’s face cast back both courage and hate. Demise himself intimates as much when he tells Link: “. . . this is not the end. My hate . . . never perishes. It is born anew in a cycle with no end! I will rise again! Those like you . . . Those who share the blood of the goddess and the spirit of the hero . . . They are eternally bound to this curse. An incarnation of my hatred shall ever follow your kind, dooming them to wander a blood-soaked sea of darkness for all time!” And this dark prophecy, whether literal or metaphorical [6], seems to map onto all of Hyrulean history; each time a resurrected evil stalks the earth, so it is inevitably met by the better angels of human nature. This cyclic curse, which would seem to be endless, is as abstracted and as absolute as the location in which it is uttered; the worlds created through this process of mirroring are each therefore different, each slightly removed from all former iterations as details are blurred and edges obscured. But the essence is unchanged even while the particulars are transformed; there is always a Kingdom, and there is always a Curse.

At battle’s end, after the sky has lost all trace of its former brilliance — marked only by shades of whites, blacks, and greys — the mirrored floor begins to show small fragments of an aquamarine sky returning. And by the end, after Demise has perished and his remains have been absorbed into the Master Sword, sky and water have once again taken on their dizzying radiance, casting mirror-images into eternity.
. . .
Late, when the Autumn evening fell,
On Mirkwood-Mere’s romantic dell;
The lake returned, in chastened gleam,
The purple cloud, the golden beam;
Reflected in the crystal pool,
Headland and bank lay fair and cool;
The weather-tented rock and tower,
Each drooping tree, each fairy flower;
So true, so soft, the mirror gave,
As if they lay beneath the wave,
Secure from trouble, toil, and care, —
A world than earthly world more fair. [7]

[1] What the developers refer to as a “hyperspace controlled by evil power”.

[2] Notably Zen Master Dogen, who wrote that “Enlightenment is like the moon reflected on the water. The moon does not get wet, nor is the water broken. Although its light is wide and great, the moon is reflected even in a puddle an inch wide. The whole moon and entire sky are reflected in dewdrops on the grass, or even in one drop of water."

[3] Among the more direct poems related to the union of sky and water in reflection is Ouyang Xiu’s Heaven’s Aspect, the Water’s Color from the eleventh century. It runs:

“Heaven’s face and water’s color — West Lake is good.
Clouds are fresh,
Gulls and egrets sleep idly;
As of old, I listen to pipes and strings.”

Another would be Meng Haoran's By Dongting Lake

"In the eighth month the lake waters are smooth,
Mirroring the heavens, melding with the sky.
A steamy mist comes off the Yunmeng Waters;
Waves move against the walls of Yueyang.
I want to cross, but I have no boat with oars --
It's a shame to live quietly in this glorious age.
I sit and watch the fishermen dangling their rods,
Pointlessly envious of them catching their fish."

[4] Take, for example, the final passage of Wordsworth’s Home at Grasmere:

“. . . while all the distant grove
That rises to the summit of the steep
Shows like a mountain built of silver light.
See yonder the same pageant, and again
Behold the universal imagery
Inverted, all its sun-bright features touched
As with the varnish, and the gloss of dreams;
Dreamlike the blending also of the whole
Harmonious landscape; all along the shore
The boundary lost, the line invisible
That parts the image from reality;
And the clear hills, as high they ascent
Heavenward, so piercing deep the lake below.”

[5] Or a passage from Thoreau’s Walden:

“In such a day, in September or October, Walden is a perfect forest mirror, set round with stones as precious to my eye as if fewer or rarer. Nothing so fair, so pure, and at the same time so large, as a lake, perchance, lies on the surface of the earth. Sky water. It needs no fence. Nations come and go without defiling it. It is a mirror which no stone can crack, whose quicksilver will never wear off, whose gilding Nature continually repairs; no storms, no dust, can dim its surface ever fresh; — a mirror in which all impurity presented to it sinks, swept and dusted by the sun’s hazy brush — this the light dust-cloth — which retains no breath that is breathed on it, but sends its own to float as clouds high above its surface, and be reflected in its bosom still.”

[6] Of course the curse is true on at least an allegorical level: there are as many essences as there are humans; and power, courage, and wisdom exist at all times in all human populations. When one facet of humanity attempts the control of the others, its power is checked and balance restored. What is perhaps more interesting is a more literal take on the curse — that the curse may cause endless physical incarnations of the Triad Foretold. That is to say, the spirit of Demise is reincarnated in each age, and his awakening is attended by the subsequent awakenings of the Goddess and the Hero. The mechanism that makes this possible likely has to do with the sealing of Demise within the Master Sword; Impa tells Link that the remnants of Demise are decaying slowly in the Sword. And whatever form this residue takes, whether conscious or not, it is still a physical (as well as metaphysical) presence in the world. As long as it exists — and its decay seems inordinately slow — so too will the world see unending new iterations of the Triad Foretold.