Author’s Note: my goal with this article is to get you to see the stable as a fragment of something larger: the tenacity and connection of a humanity scattered and searching to piece itself together once again.

"So what'll it be?"
The network of stables peppered across Hyrule, easily overlooked and seemingly unimportant, stands as both a symbol and a testament: it is one of the only indications of the vitality of the Hylian civilization and a witness to all that has come before it. The last ragged elements of humanity take shelter in these canvas sanctuaries against all the forces of the world, and these waypoints therefore contain the continuance of the Hylian people. While the major races of Hyrule all have their individual cities safeguarded against the darkness, the Hylians have only a few battered communities — Hateno, Lurelin, and Tarrey Town among them — huddled in the corners of the world. The rest is wilderness but for the stables. They are the centers of communication and the transmission of knowledge for all travelers, and they serve as havens for the weary and wayward. [1] They are gathering places for sidequests and travelers’ errands, serving as guild-esque meetinghouses wherein people can request help or leave gossip. Echoing their modest size, these stables are humble and unassuming in their goals, focusing on the smaller, day-to-day issues of Hyrule. They are the balance to what Link is doing in his efforts to save the land — they are keeping Hyrule sane (while Link is working to make it safe) for a future time in which life can again bloom with possibilities. [2] And like Hrothgar’s Hall in the tale of Beowulf, they serve as beacons of light in a world that has largely gone dark. Interestingly, and fortunate for the innkeepers, these stables are places that monsters never seem to bother; due to the nearby presence of armed travelers or something unknown, these lodges are some of the safest places in Hyrule. [3] Yet protecting them from the elements, as with any settlement on the frontier of things, requires both money and time, and much of the stables’ income is garnered from registering and boarding horses. 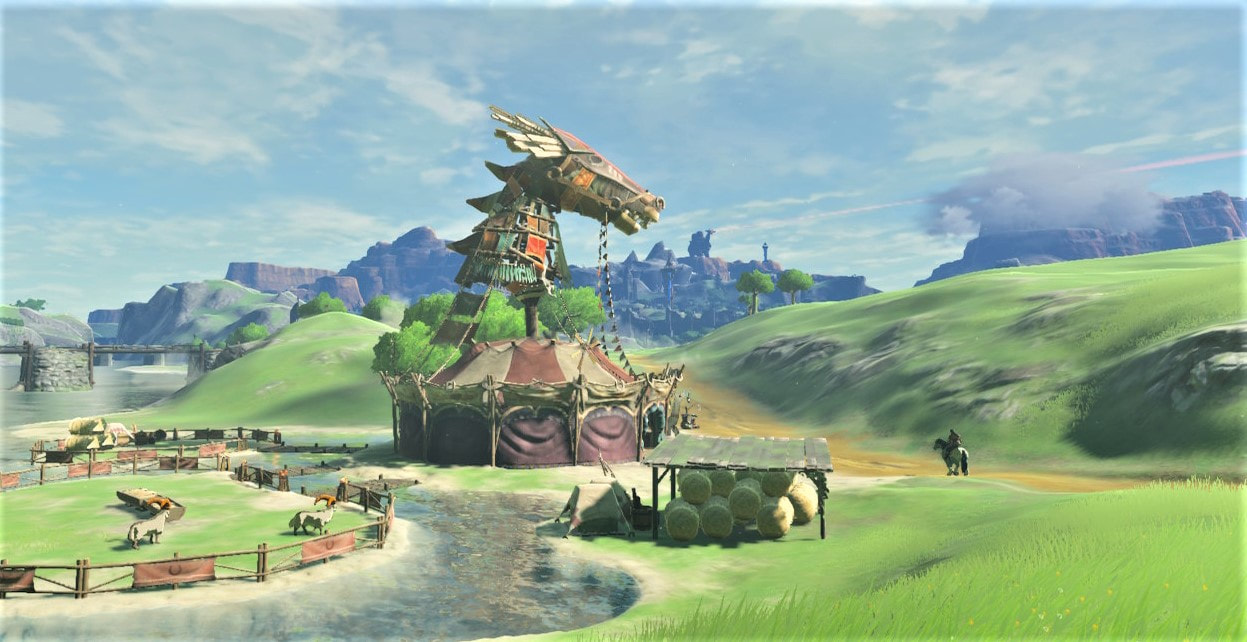 The first image depicts a man calling for a horse which is running away from him on a field of green and yellow. A perfect circle of a golden sun hangs in the sky above. In the other piece, a radiating sun cuts through a blue sky overlooking a much more confusing scene: what appears to be a terrified horse mounted by an unknown rider, a figure who has his fist raised in the air. What exactly this image depicts is unknown, though in both images the horse dominates the scene. In terms of the three remaining bays, two of them form doorways over which the cloth doors have been tied up by belts. The “doors” are of a thick blue cloth, and even when raining or snowing do not seem to be lowered. Finally, the counter is framed by two horses shaped in profile. And these are very rough-shod. Only their heads and front legs are visible, and the latter are attached in a rather crude manner. They are painted white with several bands of geometric designs in light blue and burnt orange. Their heads are raised to the sky and their eyes are the most curious of all, seemingly gemstones or pieces of metal cut into pyramids or diamonds. Each mouth carries a small lantern, gently calling guests inside on dark nights.

While all stables in Hyrule share the same basic structure, and while they all have similar interior setups, each stable has a distinct outer layout. Because their environs are so disparate, each stable requires a different way of interacting with the world: some are enclosed in fences and ringed with trees, while others are completely open to the elements; some have pens for livestock while others tend only to horses; some are absolutely surrounded by every conceivable farm good (from hay-bales to troughs) while others are relatively bare, keeping their goods indoors. Yet these implements, should the stables wish for them, all seem to come from the same source, binding all the stables together in a deeply-felt continuity of design and ambiance. Like the materials of Tarrey Town, these are all standard goods which make the stable feel like a stable. And this proves to be the critical thing — it is the creation of a pan-Hyrulean “home” which serves as a surrogate when the real thing is, as so often happens, left behind. The stable has become far more than a simple place to shelter one’s horse, or an inn where one comes to rest: it has taken on an almost archetypal parental role, especially for the Hylians whose better days, for all they know, are behind them. 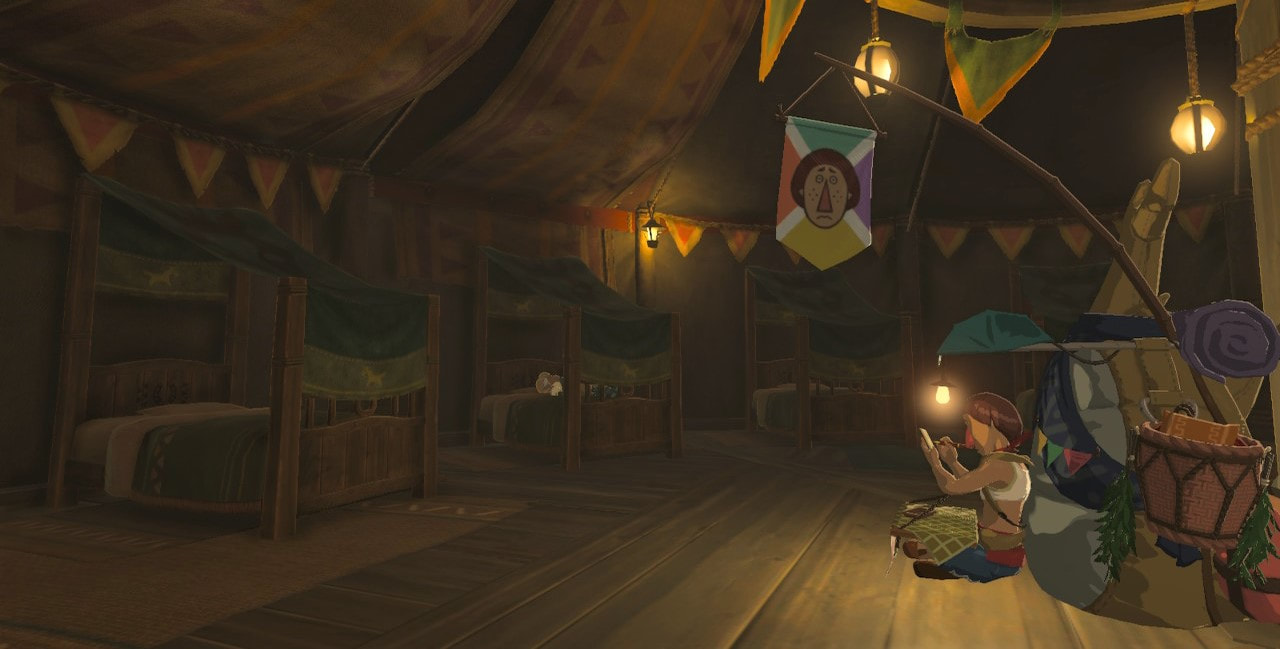 [1] "It's pretty clear that the stables in this world, this wild world, are places where human beings congregate. People — of all races, really — come here, and as you see, I'm just talking to this guy. There's a lot you can learn about the world and a lot that you might need to do in the world when you interact with all the people in the stables." —Nate Bihldorff (Nintendo Treehouse Live with Nintendo Switch)

“There are a lot of people using the stable[s] as a base, and traveling in the world, so it’s kind of interesting to see that you can collect a lot of different kinds of information here.” — Eiji Aonuma (Nintendo Treehouse Live with Nintendo Switch)

“Horses are a key element in travel and trade for the Hylians.” (A bit on the nose, perhaps!)

[2] Stables charge money both for shelter and for boarding horses, though it is inarguable that this money goes to good use: keeping a network of shelters across Hyrule and also assisting the stables in their conservation efforts.

"So what'll it be? [Register horse.] Gotcha. You sure this is the one? [Yes.] Not a problem. We charge a registration fee to help support our conservation efforts. The fee also gets you a locally made saddle and bridle for your horse. The fee is 20 rupees. Is that OK? [Yes.] Thanks. Please enter a name for your horse." — Embry, Breath of the Wild

[3] Something that continually intrigues me is that each stable has a nearby Ancient Shrine. And while this makes good sense from the standpoint of game design, it leaves us wondering about the in-game significance. Yet regardless of whether this was planned or happenstance, it is certainly helpful for the Hero on his quest.

[4] In addition to normal horses — dappled, white, grey, brown — there exist also horses that are singular in Hyrule. These are eerie horses like the Stalhorse, and horses of myth, like the White Horse: a royal horse that is said to be a descendant of Princess Zelda’s horse from a century past. There is also the Giant Horse, a massive black horse with a red mane found in the Taobab Grassland. (One could also mention that it is possible to ride bears, deer, Lynels, and even the Lord of the Mountain. [And that stupid motorcycle.])

[6] “The employees of the stables that connect all parts of Hyrule can be distinguished by their uniquely shaped hats and garb suited to their nomadic lifestyle.” Ibid., 99.

[7] These tents likely stem from the Tent Chautauquas which were a part of the Chautauqua Movement of the late 19th century which held sway across parts of the United States. These traveling tented events held such things as lectures, comedic routines, and religious sermons.